Rating:
88%
(5)
A tribute to the King of Bootleggers, this bourbon is crafted from unique mash bills, resulting in a complex high-rye expression. It's aged at least 5 years for a smooth and balanced profile.
$44.99
Add to Wish List

George Remus bourbon is made in honor of the King of the Bootleggers. Their flagship Straight Bourbon Whiskey expression is a smooth, balanced, and complex high-rye spirit that is crafted from unique mash bills with water from the underground aquifer that sits below the historic G. Remus Distilling Co. distillery in Lawrenceburg, Indiana. It's aged at least 5 years and has notes of maple, vanilla, and cherry, along with a pleasant sweetness and rye spice.

The straight bourbon opens with a complex nose with rye bread notes, as well as caramel, maple, vanilla, cherries, and cinnamon. The palate has a delicate balance of sweetness and spice with vanilla, caramel, and fruity notes with a gentle touch of smoke. 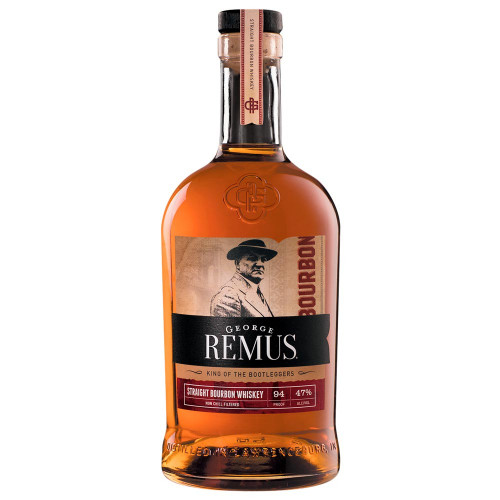