Size2130mL Proof0 (0% ABV)
A delicious tribute to Buffalo Trace's most recognized employee made to be enjoyed with friends and family.
Notify me when this product is back in stock. 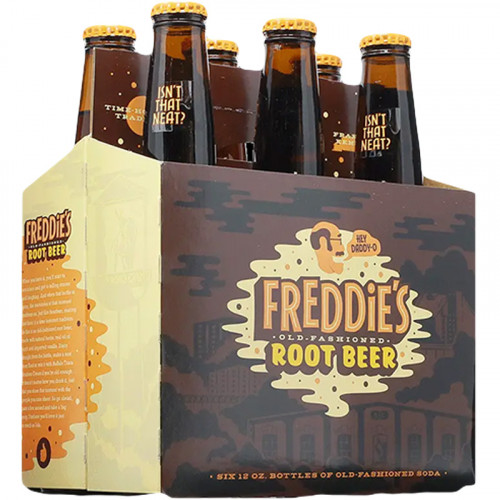 Freddie Johnson is a Buffalo Trace Distillery legend and a true Kentucky gem. As the Distillery tour guide, he's been delighting guests with his fun personality and fabulous story-telling for many years. As a third-generation Buffalo Trace Distillery employee, following the footsteps of his father and grandfather, Freddie's knowledge and passion for bourbon have made him a beloved Distillery icon. Freddie was also inducted into the Kentucky Bourbon Hall of Fame and his personality is a natural fit for this old-fashioned root beer.

Made with natural herbs, real oil of birch, and imported vanilla Freddie's Old-Fashioned Root Beer is a deliciously smooth soda made to be enjoyed with friends and family—just like bourbon. The bottle design features Freddie’s recognizable image and his well-known catchphrases. Isn't that neat? The six-bottle carrier depicts scenes of the Distillery and Freddie fishing along the banks of the Kentucky River—a shoutout to Freddie's fishing trips with his dad and grandad. That’s what inspired the Distillery to make these old-fashioned sodas—perfect for sipping, sharing, and making memories. Drink it neat, on rocks, or mix it with Buffalo Trace Bourbon Cream to make a fabulous root beer float.