Size750mL Proof114 (57% ABV)
Made with locally-sourced ingredients and bottled at 114 proof, every drop of FEW Standard Gin is handmade in Evanston, Illinois.
Notify me when this product is back in stock. 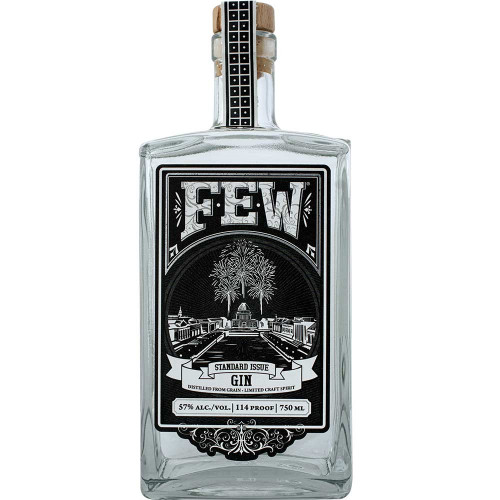 Founded as a dry community, Evanston, Illinois was the birthplace of the Women's Temperance Movement and home to Frances Elizabeth Willard, an influential protagonist in the story of Prohibition. As the Temperance Movement approached boiling point, abstinence slowly began to creep across the country and Willard and her league of temperance supporters turned Evanston into a stronghold.

Today, hidden down a dark alley in a former chop shop, Hletko and his skilled team are producing a batch of Limited Edition FEW Spirits Standard Issue Gin. The gin is made from a mash of malted barley, corn, wheat and rye. While many distilleries buy neutral grain spirit that they further distill into gin or whiskey, every drop of FEW Standard Gin is made by hand at Hletko's space in downtown Evanston. Hletko buys his corn from a farmers' co-op in Indiana and his wheat and malt from farmers in Wisconsin. Then he mashes, ferments and distills the gin at his Illinois distillery.

With strong notes of juniper and fennel, FEW Spirits Standard Issue Gin is bottled at 114 proof in homage to the daily rations of gin given to sailors in the Royal Navy — the high proof ensured that their cannons would continue to fire even after the gin spilled on their gunpowder.

Frances Elizabeth Willard would not be amused. It's unlikely she'd approve of the cheeky name Hletko chose either, which is sometimes written as "F.E.W. Spirits." "People say she's rolling over in her grave," Hletko jokes. "I wouldn't know about that — the name is just a coincidence."

Don't miss your chance to pick up a bottle of Limited Edition FEW Standard Gin today.

Strong notes of juniper and fennel. The high proof makes it excellent in cocktails.