$34.99
Caskers Rewards members earn up to 1 store points back when buying this bottle.

Size750mL Proof88 Proof (44% ABV)
Named after a literary legend, this gin is made using classic and contemporary botanicals. 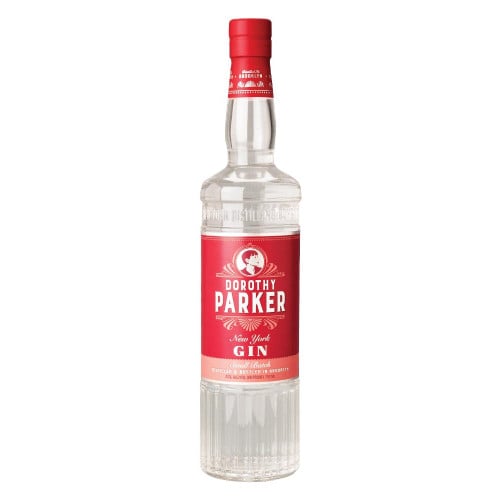 In an age of restless brilliance, Dorothy Parker was a singular sensation. Born in New Jersey, Parker was raised in New York City and rose to acclaim, both for her literary output and as a founding member of the Algonquin Round Table. After a lifetime of work as a critic, satirist and short-story writer, Parker collaborated with Alexander Woollcott to produce an anthology of her work entitled The Portable Dorothy Parker. Parker's is one of only three Portable series that remain continuously in print (the other two being Shakespeare and the Bible).

"I've been a devotee since I was 19 or 20 — reading Parker in college — and I wanted to pay tribute to her, both for everything she's done for me and for New York," says Allen Katz, co-founder of New York Distilling Co. Together with Tom Potter, founder of Brooklyn Brewery, Katz opened the doors to his 5,000 square-feet distillery in Brooklyn (the distillery straddles the neighborhoods of Williamsburg and Greenpoint — one door to the distillery opens up to the Williamsburg zip code and the other to the Greenpoint zip code) just one year ago.

Much like Dorothy Parker herself, Dorothy Parker Gin is bold and robust, with a hint of sweetness. "While juniper is the backbone of any gin," explains Katz, "we add a number of classic and contemporary botanicals," including orange peel, lemon peel, coriander, green cardamom, sweet cinnamon, elderberries and dried hibiscus petals.

After distilling the wash inside a 1,000 liter, Christian Carl alembic pot still imported from Germany, Katz lets Dorothy Parker Gin rest in stainless steel tanks for a few days. "We like to let it rest after distilling it," Katz says, "in order to let the flavors come together and really harmonize." After resting in the tanks, the gin is brought to proof using double-filtered water before each bottle is filled and labeled by hand. The labels, which are adorned with Paker's profile, were designed by Milton Glaser, creator of the iconic "I LOVE NY" campaign.

Dorothy Parker Gin has a nose of juniper and peppercorn, and a bouquet of hibiscus, cinnamon, cardamom and elderberries with a touch of sweetness. Dorothy Parker — a gin enthusiast herself — once remarked, "I like to have a Martini, two at the very most; three, I'm under the table, four I'm under my host!" We suggest you stick to two or three.

Nose is light and airy, with an aroma of juniper, citrus zest and peppercorn. Initial notes of elderberry and hibiscus give way to notes of cinnamon and cardamom.