Size750mL Proof80 (40% ABV)
One of only a few vodkas produced in Ireland, Dingle Vodka is quintuple distilled and charcoal filtered, emphasizing purity above all else.
Notify me when this product is back in stock. 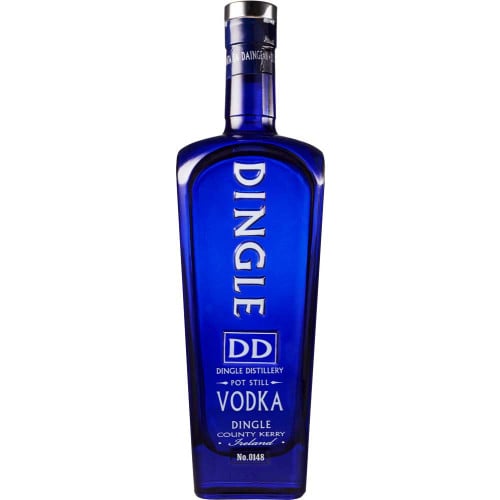 Two hundred years ago, there were over a hundred officially recognized distilleries in Ireland. Today there are less than ten. Founded as Ireland’s first artisan distillery, Dingle takes its name from the town in which it is located, where tourists flock to visit Europe’s westernmost human settlement. As of 2012, an old sawmill was converted into a distillery, where Dingle marries Ireland’s tradition of independent distilling with innovative processes only feasible for small batch producers.

Crafted in small batches of only 500 liters, the folks behind Dingle Vodka have emphasized purity above all else. Premium grain alcohol is quintuple distilled before being charcoal filtered, cut with water from a well 240 feet below the distillery, and bottled by hand. This is one of only a few vodkas produced within Ireland!

Dingle Vodka is a high quality, neutral grain spirit with a creamy texture and just a touch of sweetness that makes it as good sipped neat as it would be shaken or stirred in a cocktail.

Dingle was named the best vodka in Ireland at the 2015 Irish Whiskey Awards. Pick up a bottle today!

Dingle vodka is a high quality, neutral grain spirit with a creamy texture and just a touch of sweetness that makes it as good sipped neat as it would be shaken or stirred in a cocktail.