Size750mL Proof80 (40% ABV)
Crystal Head Vodka celebrates diversity and equality with its pride limited-edition bottle. The rainbow-colored bottle contains the original Crystal Head Vodka expression, made from the highest quality, locally-sourced Canadian corn and pristine water from Newfoundland. This multi-award winning premium vodka is perfect for mixing a vibrantly colored cocktail.
Notify me when this product is back in stock. 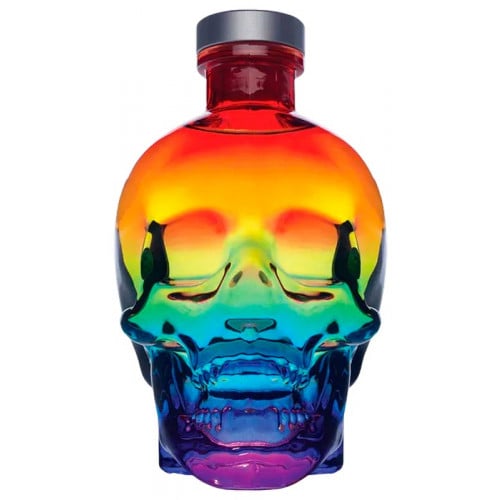 Crystal Head Vodka is the brainchild of actor Dan Aykroyd and artist John Alexander, who came up with the idea in 2007, after Aykroyd decided to make his own vodka frustrated by the fact that he could not find additive-free vodka on the market. The famous bottle was designed by Alexander and inspired by the pair's shared fascination with the legend of the thirteen crystal skulls. Creativity is at the heart of everything they do and the reason they craft the purest, smoothest vodka with one of a kind packaging and imaginative thinking. Crystal Head uses only the highest-quality ingredients to create unique expressions of ultra-premium vodka. The brand is manufactured by Globefill Inc. in the Canadian province of Newfoundland and Labrador.

The brand’s range comprises three multiple-award winning expressions. The original formula is made from Canadian "Peaches and Cream" sweet corn, and comes in a colorless bottle. The second expression, Aurora, is made from English wheat. Its bottle has an iridescent metallized finish, which pays tribute to the beauty and mysterious visual properties of the aurora borealis. Crystal Head Onyx is a blue agave based vodka, and one of the first agave-based vodkas available commercially. It comes in a black bottle. Crystal Head Pride limited edition vodka celebrates diversity and equality.

The rainbow-colored bottle contains the original Crystal Head Vodka expression, which is distilled 4 times from the highest quality, locally-sourced Canadian corn, and blended with pristine water from Newfoundland. The vodka is filtered seven times, of which three filtrations are through layers of semi-precious crystals known as Herkimer diamonds. Crystal Head Vodka has been an ongoing supporter of the LGBTQ+ community for a number of years. They have been proud supporters of the Stonewall Sports program since 2017, The Test Positive Awareness Network, and Lurie Children’s Hospital Transgender Youth Program, and have donated the profits from this bottle to Kalaiedescope Trust.

The nose has neutral grain aromas with a delicate touch of citrus. The palate is silky smooth with a hint of sweetness and vanilla. Ends with a sweet, creamy finish.