Caskers Rewards members earn up to 4 store points back when buying this bottle.
Size750mL Proof60 (30% ABV)
This rum is crafted with Caribbean rum, fresh pumpkin, cinnamon, and autumnal spices. Like pumpkin pie in a (pumpkin-shaped!) bottle, the 60-proof spiced rum is the perfect October sipper or cocktail base.
Notify me when this product is back in stock. 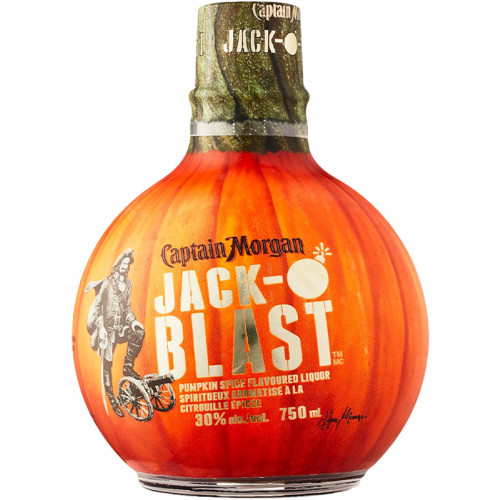 Captain Morgan has been sold in the US since 1984. Adorned with the iconic artwork by award-winning artist Don Maitz, it's one of the largest spirit brands on American soil and an instantly recognizable classic. Distilled from sugar cane in continuous stills it is first aged for up to a year before the proprietary recipe of spices and flavors are added. Various indigenous Caribbean spices contribute to its distinct flavor profile. The lineup has expanded considerably with various additions ranging from Pineapple and Coconut Rum to Captain Morgan Apple Smash, a Private Stock offering, and several others. Captain Morgan Original Spiced Rum, naturally, remains their flagship offering.

Captain Morgan Jack-O-Blast Rum is a pumpkin spiced rum that is crafted with Caribbean rum with the addition of fresh pumpkin, cinnamon, and autumnal spices. This seasonal spiced rum expression is bottled at 60 proof and features a unique pumpkin, caramel, spice, and vanilla profile that is equally suited for shots, sipping, and cocktails. The attractive pumpkin-shaped bottle makes it the perfect October drink and an eye-catching addition to any liquor cabinet.

Get your pumpkin-shaped bottle of this seasonal rum today!