Be the first to review this product
Campari's conveniently bottled take on the classic Negroni is crafted with equal parts London dry gin from the UK, Campari, and Vermouth Rosso for that classic profile of citrus, bittersweetness, and herbs.
Add to Wish List
Notify me when this product is back in stock.

The recipe of the iconic original Campari from 1860 remains a closely-guarded secret to this day. It was made famous by its signature vibrant red color, intense aroma, and distinctive bitter taste that make it an invaluable ingredient in countless cocktails including the Negroni. Now the Campari Negroni ready-to-drink cocktail takes the guesswork out of the equation. It's a conveniently bottled version of the famous Italian cocktail that was invented in 1919 when Count Negroni figured he would prefer some gin instead of soda in his Americano. One part London dry gin, sourced from the UK, one part Campari, one part Vermouth Rosso, it's a classic with a balance of juniper, herbs, citrus, and bitterness.

It's a perfect balance of juniper, spice, and herbs. There's plenty of citrusy orange notes and a sweetness that is balanced by bitterness, along with a long, smooth, and dry finish with gentian and wormwood. 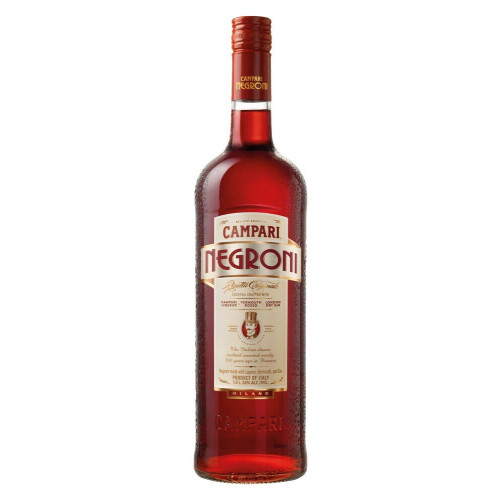