Size750mL Proof60 (30% ABV)
Coming from the Blue Light, a famous music venue in Lubbock, Texas, where one of the founders, Dustin Six, is co-owner and head bartender, the idea for Burn Original Habanero Flavored Vodka originated at the heart of club life. With its signature habanero delayed kick and lasting aftertaste, however, it has certainly surpassed the club's limits.
Notify me when this product is back in stock. 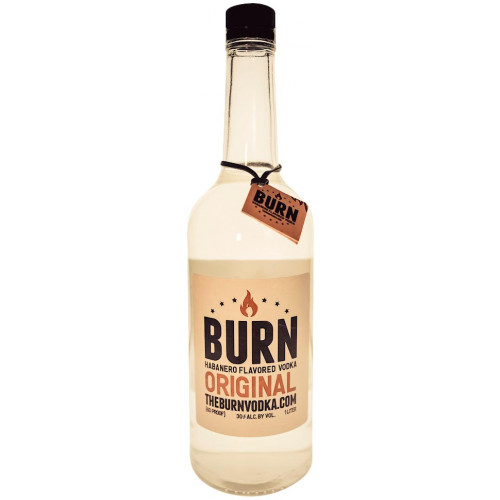 The story of the iconic Burn experience began in the fall of 2003 at the Blue Light, the beloved music venue in Lubbock, Texas, famous for introducing to the world the top names of Texas country music. A chocolate habanero was put to soak in a bottle of vodka in order to have something unconventional to drink at the end of the year. The result was intriguing and so, the burn idea was born. A bottle with a pepper in it became the hottest new thing at the Blue Light and after trying it, everyone would want a second burn shot, which came in a number of flavors: apple-burn, pickle-burn, grape-burn. The different flavors were the results of experimenting by Dustin Six, co-owner and head bartender of the Blue Light Live, who founded Burn Habanero Flavored Vodka together with Stefan Estreicher, a professor of physics who has been growing habaneros for decades, and Savannah Gates, engineer and bar scene connoisseur.

Due to popular demand, a faster process was needed to produce a habanero concentrate. This proved to be complicated, since most distilleries prefer producing vodka with artificial flavors, but this would miss the entire essence of Burn Habanero Flavored Vodka – the famous habanero delayed burn, its signature aftertaste and the sweet taste of fruit, which can be enjoyed on its own or in a Burn cocktail.

Finally, they landed on the Pinkerton Distillery south of Lubbock. After extensive testing, a new, less-diluted, ‘3X’ fresh-pepper concentrate was created from seed, grown in Lubbock. In the future, however, the peppers will also be grown on a fascinating hydroponic farm in Amarillo. A hydroponics farming system doesn't use soil, making it very environmentally sustainable. During bottling, a fixed amount of habanero concentrate is added to 60-proof vodka, which is made from exclusively locally-grown maize. The grain is distilled 16 times, reaching 192-proof and then cut with water. Each bottle is a little cloudy, with traces of peppers, but this is precisely the beauty of the Burn experience. Their advice: just shake the bottle and enjoy the burn.

Pick up your bottle today and experience the Burn!

Signature Habanero burn intrigues with a delay, but does not overwhelm. A sweet, fruity aroma is not overpowered and compliments the burn beautifully. Producing a long, pleasant aftertaste that lingers long after the shot is empty, it certainly awakens the senses.