Size750mL Proof80 (40% ABV)
Distilled 6 times from 100% American corn, then charcoal-filtered using a proprietary process, and finally blended with Catskill Mountain water, this award-winning 80-proof vodka is silky-smooth.
Notify me when this product is back in stock. 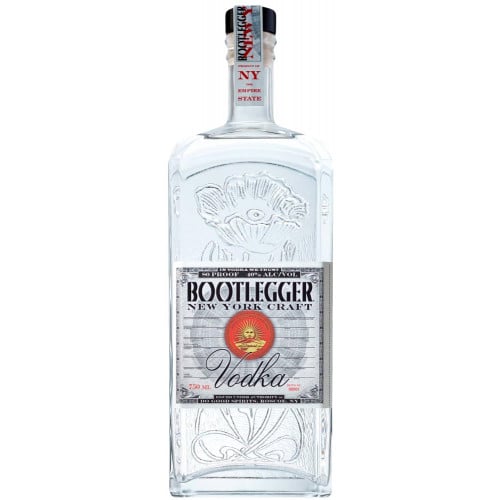 The Do Good Spirits distillery is situated in Roscoe, New York ― a town that lies within two hours of driving distance from New York City that is renowned for its fly fishing. Located in the former Roscoe Firehouse and VFW Hall, they are pursuing their dream of producing high-quality spirits while helping the local economy on the way. Their symbols are the poppy flower and Florian Cross. The first serves as a way of remembering fallen soldiers, the second the patron saint of firefighters. Formerly known as Prohibition Distillery, the current name comes from a toast that the founder and head distiller Brian Facquet's navy buddy made before his last deployment: "Do Good Spirits… Good People, Good Spirits, Good Times. To Do Good!"

Bootlegger New York Craft Vodka began as a dream to make a craft spirit sourced from local ingredients, which would be a celebration of the American spirit during Prohibition. Made from 100% American corn, this vodka is gluten-free and distilled six times before being charcoal-filtered using a proprietary process, blended with Catskill Mountain water, and bottled by hand. "We’ve taken vodka to a higher level and the vodka aficionados are taking notice, and awarding medals. What else would you expect from a spirit born in the Catskill Mountains?" With a hint of green apple and an uncharacteristically smooth finish (this vodka has no burn!), it earned a Gold Medal at the 2010 New York International Spirits Competition.

With a hint of green apple, this vodka has a peppery, sweet grain character and an exceptionally clean and smooth finish. It has no burn.