Caskers Rewards members earn up to 4 store points back when buying this bottle.
Size750mL Proof80 (40% ABV)
Bivi is the proud Sicilian Vodka You can make cocktails like Blood Mario with. Created by the Master Distiller Giovanni La Fauci, represented by Chazz Palminteri, with Mt.Etna in ‘the backyard,’ this is La Vodka Nostra through and through.
Notify me when this product is back in stock. 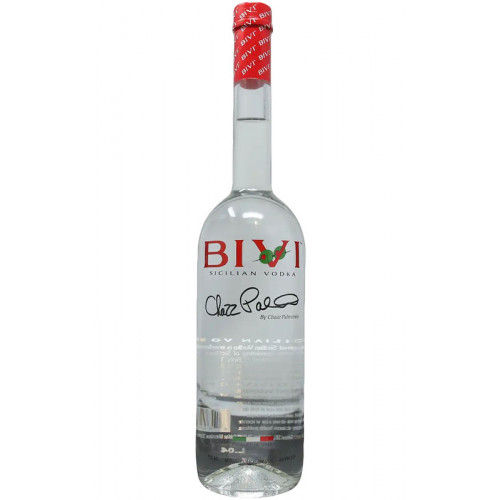 Everything about Bivi vodka is straight-up Sicilian swag. Even the name itself comes from the Sicilian-Italian term ‘Bivi!’ - it means ‘to drink (or more often just: ‘drink’).
The vodka in question is crafted in the heart of Sicily. The man behind the drink is said to be ‘old school,’ like its maker and spokesperson, and the way they see it, vodka should reflect precisely how and where it was made. Master Distiller Giovanni La Fauci who’s been in the spirits business since he was only 11. Best believe he is particular about producing vodka! Only using Sicilian lemon and orange wood to fire stills is one thing, but only doing it when the ‘moon is just right’ is taking it to a whole new level. Combine that with the rich volcanic soil, courtesy of Mt. Etna in the distilleries ‘backyard’, and you get yourself a super-exciting tipple. Chazz Palminteri seems to think so. You’d seen him Modern Family, The Usual Suspects, The Bronx Tale, etc. The famous character-actor from the Bronx is a proud Sicilian, an avid Continental European vodka enthusiast, and has collaborated on Bivi since early.
Bivi is made with semolina wheat and pristine local water. It’s pretty intense but with an underlining sweetness.

A clear liquor. Initially bares a strong ethanol flavor that’s evened out with sweetness. It finishes with a kick and brings it around to floral notes.