Size750mL Proof86 (43% ABV)
Distilled by hand using James Burrough’s original copper still, each bottle of Beefeater Burrough’s Reserve displays its batch and bottle number on the label. Burrough’s Reserve won the Gold Medal at the International Wine and Spirits Competition, and was named “The 5 Best Bottles of Gin in the World” by Business Insider.
Notify me when this product is back in stock. 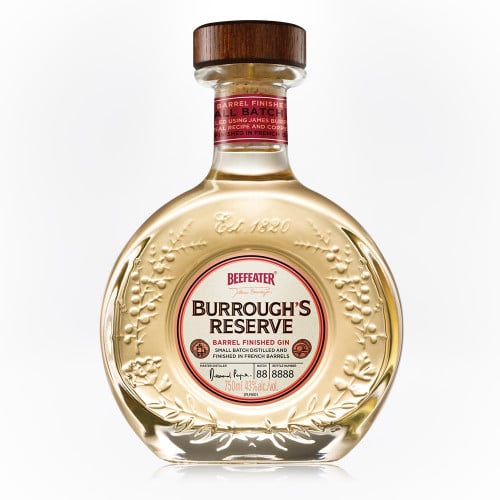 The distillery appointed Desmond Payne as Master Distiller in 1995 — with decades of experience, Payne has been named the world’s most experienced gin distiller and personally tests over 200 juniper samples each year to ensure Beefeater’s uniqueness and quality. Once the botanicals — which include Seville orange and lemon peel, whole juniper berries, angelica seeds, coriander and almonds — are selected, they’re put through a 24-hour steeping process to extract the maximum amount of flavor before finally being sent for distillation. During distillation the ingredients are heated, turning the liquid to vapor, which carries the oils from the botanicals. The vapors are then condensed back to liquid form. While the liquid is passing through the Spirit Safe, the stillmen use their noses to select the ‘perfect cut’ from the run to become Beefeater gin.

“I created Beefeater Burrough’s Reserve as I wanted to make something truly unique that celebrated the distilling heritage of Beefeater. I had been interested in resting gin for a while and knew that if the cask was right, we could make a really exciting new gin that changed people’s perceptions of the spirit. It also gave me the chance to use our small historic copper still that dates back to the 19th Century. Using Jean de Lillet casks introduces a new character to the gin, elevating it to a place that had not been explored before. I expect Burrough’s Reserve to appeal to free thinking individuals who enjoy challenging convention and exploring new sensory experiences with gin,” notes Desmond Payne.

Burrough’s Reserve won the Gold Medal at the International Wine and Spirits Competition, and was named one of “The 5 Best Bottles of Gin in the World” by Business Insider.

Payne recommends pairing with dried fruits such as dates, apricots and figs to allow the drinker to experience the full flavour and aroma profile. He also suggests pairing with cheeses that are salty and hard, fruity and nutty, and creamy soft goat cheeses. Payne’s cheese suggestions include Old Winchester, a hard salty English cheese from Nr Winchester; Comte, a 18 month old from France; and Tomme De Chevre, a creamy and flavorsome goat cheese from France.

The nose is spicy with floral notes, vanilla, developing into soft juniper aromas. Palate is soft, complex spice, subtle citrus flavors lead to a distinctive juniper middle-taste, returning to a gentle spice on the finish.