Learn more
Size750mL Proof80 (40% ABV) *Please note that the ABV of this bottle may vary
The results of the only tequila project of its kind, this añejo tequila from a selección project is a reflection of Mexico's unique history and geography brought to you from the highest altitude tequila distillery. 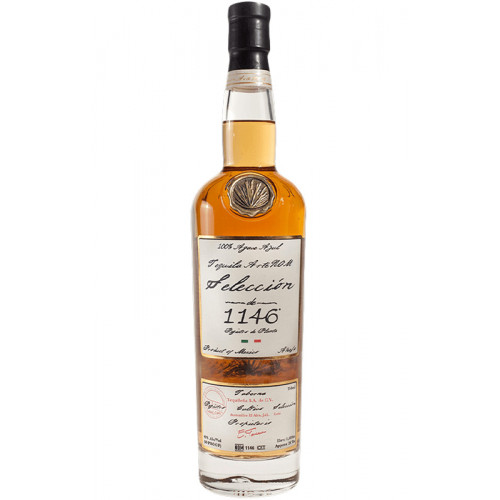 ArteNOM Selección de 1146 Tequila Añejo is produced by master distiller Enrique Fonseca at Casa Tequileña (elevation: 4,600 feet). Fonseca is a fifth-generation master distiller, and is celebrated for owning one of the largest agave plantations in the Los Altos region. His tequila is distilled twice, first through stainless steel pot stills and then again through copper-pot stills. Sixty percent of Selección ArteNOM 1146 Tequila Añejo was matured for two years in French oak, while the remainder was matured in French oak for three years. Then, the tequilas were expertly married together and aged for an additional year in used American white oak casks. By layering American oak on a French oak base, Fonseca "achieves a comfortable, familiar finish with unparalleled, underlying complexity," says Lustig. Selección ArteNOM 1146 Tequila Añejo has notes of toasted almonds and creamy vanilla, which are followed by layers of dried fruit and baking spices. The long, earthy finish is complemented by hints of vanilla, caramel and oak.

Selección ArteNOM Tequila is the only project of its kind.

Bold and herbaceous nose with distinct sweet and creamy flavors of toffee, walnut candy, custard along with zesty orange and dark chocolate.