Size750mL Proof60 (30% ABV)
Western Son Distillery is based in Pilot Point, Texas. This flavored expression is based on their vodka that is distilled 10 times from a mixture of Midwest and Texas yellow corn. The award-winning vodka is bursting with juicy berry notes that make it a great choice for cocktails. 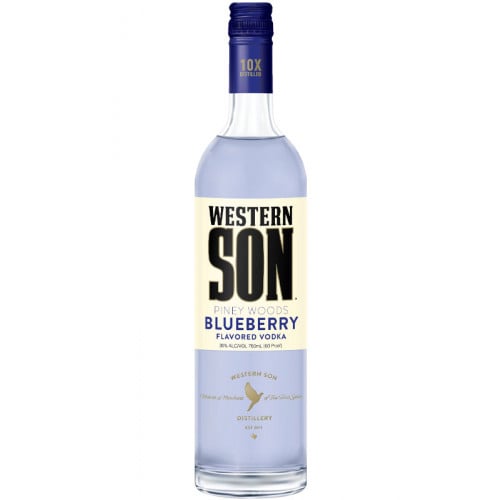 Crafted with small-batch Original Texas Vodka that's distilled 10 times, Western Son has a number of flavored vodka expressions in their lineup that includes lemon, blueberry, watermelon, lime, prickly pear, cucumber, raspberry, peach, and grapefruit vodkas. Western Son Piney Woods Blueberry is bursting with juicy blueberry flavor and is bottled at 60 proof. It has won a Gold Medal at the SIP Awards in 2017.

Grab your bottle of this juicy flavored vodka today!

The bright blue hue of this flavored vodka is as inviting as the juicy fresh berry aromas with blueberry, blackberry, and raspberry. The palate is sweet, tangy, and fruity with blueberry cobbler and blueberry jam notes.