Size750mL Proof90 (45% ABV)
Don Cenobio founded the Sauza dynasty in 1873, opening the distillery in Jalisco, Mexico. This limited-edition expression, released under the new Legacy banner, pays tribute to one of the fathers of tequila.
Notify me when this product is back in stock. 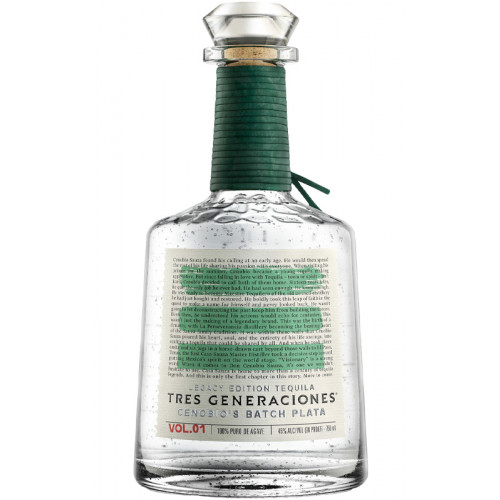 Their agaves are harvested from Sauza's very own plantations, and are only harvested once they have reached full maturity ― meaning that the plants are between 6 and 8 years old. After being hand-selected by the Master Distiller, they are fresh-pressed, extracting the juice with minimal bitterness before it is cooked. After the cooking and fermentation, the tequila is triple-distilled ― the additional distillation removes as many impurities as possible, resulting in a smoother spirit with minimal burn and harshness.

Tres Generaciones now has an unaged Plata, rested Reposado, and an aged Añejo expression in their lineup. The limited-edition releases, however, are released under the Tres Generaciones Legacy banner. Cenobio's Batch is one such expression, crafted in honor of Don Cenobio, founder of the Sauza dynasty. Naturally, this means that traditional processes were employed in crafting this bold tequila that's bottled at still strength.

Get your bottle of this limited-edition tequila today!

The nose opens fruity and citrusy with fresh agave and herbal undertones. The palate has cooked agave, a touch of spice, toasted oak, and hints of pepper that linger on the clean and refreshing finish.