Size750mL Proof80 (40% ABV)
This extra añejo expression celebrates mankind taking one step closer to the sun and was launched the same year as the first International Space Station. It's a traditionally-made tequila that was aged for 6 years in French and American white oak barrels.
Notify me when this product is back in stock. 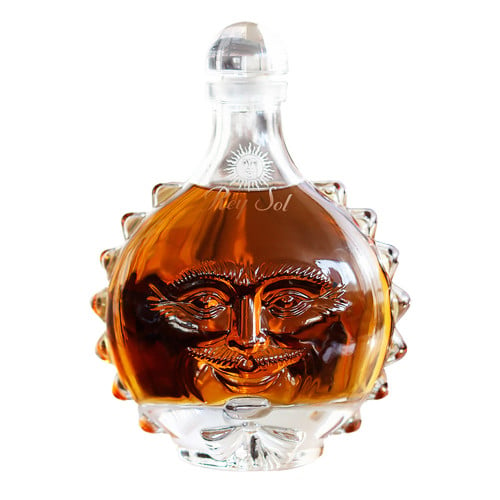 Casa San Matías has been making tequila since 1886, making it one of the oldest family tequila distilleries in Mexico. It was during the revolutionary era that Don Delfino Gonzales sprung on the opportunity to channel his passion into making the famous Mexican spirit. In 1940 the distillery was relocated to Ojo de Agua in the Los Altos region of Jalisco. They were the first distillery to introduce an extra-aged tequila to the Mexican market in the 1990s ― the San Matías Gran Reserva. With more than 130 years of tequila-making behind them, they are just as passionate about tradition as they once were.

Majestic Rey Sol tequila was launched in 1998, just as the first International Space Station brought mankind closer to the sun. The depiction of the sun on the beautiful decanter was designed by Mexican artist Sergio Bustamante. It's a traditionally-crafted spirit, made from Casa San Matías' own agaves, grown in the mineral-rich soil of the Jalisco Highlands. These are first baked for 48 hours at exactly 194°F. The cooked agaves are then milled and natural spring water is added. The juice ferments for 72 hours in fermentation tanks, before being distilled slowly at a low temperature. Finally, the tequila is aged for 6 years in French and American white oak barrels.

Grab one of these beautiful bottles today!

The nose has oak, chocolate, vanilla, hazelnut, roasted almonds, and dried fruit notes. It's sweet on the palate with prominent oak notes. Finishes with lingering nutty and chocolate notes.