Size1L Proof86 (43% ABV)
Each bottle of this exclusive batch of Tears of Llorona is personally signed by one of the most respected Master Tequileros in the world: Germán Gonzalez! It can be yours.
Notify me when this product is back in stock. 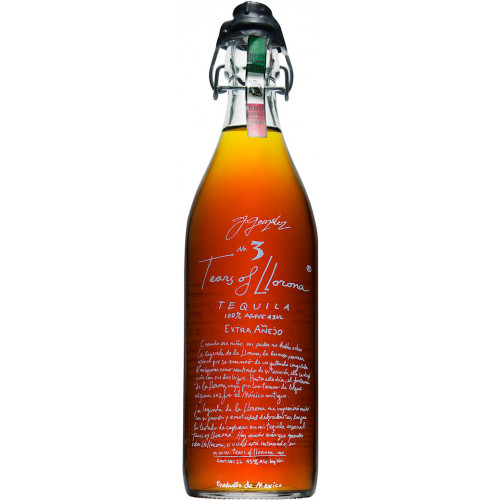 About Tears of Llorona No. 3 Extra Añejo Tequila (Signed by Master Distiller)

Originally intended to be German Gonzalez’ own private stock, Tears of Llorona No. 3 Extra Añejo Tequila is hand-crafted from 100% blue agave grown in the volcanic soil surrounding Atotonilco, in the highlands of Jalisco, where growth is extremely slow. Gonzalez selects these agaves late in the harvest, at their peak ripeness, using his years of experience and special knowledge passed down from his father. Once harvested, Gonzalez brings the agaves to his distillery where they are roasted, then shredded, in the traditional way to extract the sugar-rich juice called the aguamiel. The aguamiel is then fermented with a proprietary strain of yeast before being twice-distilled through copper pot stills.

After distillation, the Tears of Llorona No. 3 Extra Añejo Tequila is aged for nearly five years in several different types of barrels — half ex-Scotch whisky barrels, a quarter Sherry casks and another quarter French Limousin barrels previously used to mature Cognac — before being blended together at optimal maturity.

Tears of Llorona No. 3 Extra Añejo Tequila has a bouquet of black cherries, vanilla, honeysuckle and apples, and leads to notes of chocolate, toffee and crème brûlée on the palate. The finish is spicy and elegant, with notes of cinnamon and cloves balanced by sweeter touches of raisins, caramel and oak.

Men’s Journal called Tears of Llorona, “a sipping tequila of the highest order — a rich, complex liquor that's more like a high-end scotch or cognac."

Each bottle of this exclusive batch of Tears of Llorona is personally signed by one of the most respected Master Tequileros in the world: Germán Gonzalez!

Pick up a piece of history today!

About Tears Of Llorona

Master Tequilero Germán Gonzalez learned the art of making tequila from his father, Guillermo Gonzalez Diaz Lombardo, whom many credit with bringing the first ultra-premium tequila — Chinaco — to the United States. Guillermo was formerly the head of Mexico’s Department of Agriculture, and indeed if you trace the Gonzalez family’s heritage back even further, you will eventually arrive at General Manuel Gonzalez, President of Mexico from 1880-1884. Today, Germán is carrying on the legacy of many Gonzalez generations with his creation of Tears of Llorona No. 3 Extra Añejo Tequila.
Explore all Tears Of Llorona bottles >>

Bouquet of black cherries, vanilla, honeysuckle and apples, leading to notes of chocolate, toffee and crème brûlée on the palate. Finish is spicy and elegant, with notes of cinnamon and cloves balanced by sweeter touches of raisins, caramel and oak.