Size750mL Proof80 (40% ABV)
Founded in 1937, La Alteña Distillery is still family-operated today. This is a 100% agave añejo, aged for 4 years in American white oak and created by the grandson of the founder. Offering a rich flavor profile, this one should be savored neat, like the best of whiskies.
Notify me when this product is back in stock. 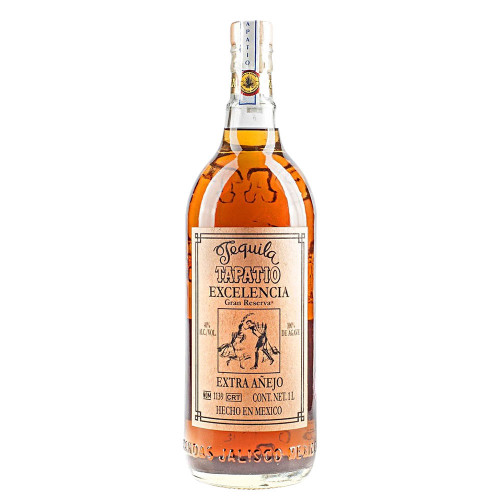 La Alteña Distillery was founded in 1937 in the Jalisco region, Mexico, by Don Felipe Camarena. Born into a family with a rich tequila distilling tradition dating back to the early 1800s, he began his career by growing and selling agave to other distillers. In 1940, La Alteña Distillery sold its first bottle of 100% blue agave artisanal tequila under the brand name Tapatio. With over 80 years of experience in making authentic, hand crafted tequilas, Tequila Tapatio's mission is to preserve this rich tradition and to satisfy the customers who cherish quality over quantity.

Don Felipe Camarena passed his passion and know-how onto the next generations and today, the distillery is led by his grandson, Carlos. Many of the methods used today are the same as in the time of his grandfather. A large stone wheel, a Tahona, crushes the cooked agave, before it’s mixed by foot in a barrel preceding fermentation. Tapatio tequila is double distilled almost to bottle strength, retaining the most of its natural character. Recently, Tapatio, Ocho and El Tesoro tequilas produced at the distillery have gained international critical acclaim and popularity due to their unmatched quality, integrity and authenticity.

Tapatio Tequila Excelencia is a 100% agave añejo, created by Carlos Camarena. The Excelencia Extra Añejo was aged for four years in first-fill deep charred American white oak barrels. The flavor profile is quite complex with the nose offering flavors of vanilla, maple, caramel and apple balanced by roasted pepper, cinnamon and spices. If you leave it to breathe, it'll surprise you with aromas of baked bread, sweet pea and floral notes. The aromas further develop on the palate, delivering intense flavors and a rich and creamy character. At La Alteña Distillery, they say it would be “unforgivable” to ruin this stunning tequila in a cocktail or even dilute it with water. It should be savored and admired neat, like the best of whiskies and cognacs on the market.

A dark mahogany color. The nose is packed with notes of vanilla, maple, caramel and apple, balanced by cooked agave, roasted peppers and spices. The palate offers intense flavors of agave, cake, spices, chocolate, vanilla, brown sugar and caramel as well as creamy oak. The finish is warm, rich and long.