Size750mL Proof80 Proof (40% ABV)
An homage to General John Stark, a Revolutionary War hero, this vodka is distilled from 100% New Hampshire apples.
Notify me when this product is back in stock. 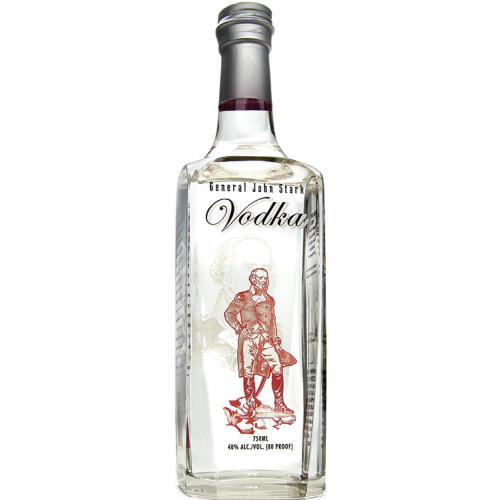 In 1728, John Stark was born to Irish immigrants in Londonderry, New Hampshire. After being taken hostage by a tribe of Native Americans at the age of 24 and serving as a second lieutenant during the French and Indian War at the age of 29, Stark took command of a regiment of New Hampshire Minutemen and joined the Continental Army in 1775. At the Battle of Bunker Hill, Stark reinforced Col. William Prescott and destroyed a large contingent of British forces that tried to flank the revolutionaries.

Two years later, Stark commanded a force of 1,400 New Hampshire militiaman in Bennington, Vermont, against British General John Burgoyne's regiment. Leading the charge against the British, Stark shouted, "We'll beat them before night or Molly Stark's a widow." Stark's overwhelming victory against Burgoyne became a turning point in the Revolutionary War, and Stark was honored as "The Hero of Bennington."

After fermenting the apples for nearly three days, the wash, which is comprised entirely of New Hampshire apples and uses no grain whatsoever, is triple distilled in a handmade, 150-gallon Christian Carl alembic pot still. Following distillation, each bottle is filled and labeled by hand. The result is a smooth vodka with a natural, non-syrupy sweetness.

In 1809, when a group of veterans gathered to commemorate the war, General Stark — too old to travel — sent a letter that closed, "Live free or die: Death is not the worst of evils." This became the New Hampshire state motto.

Live free with a bottle of General John Stark Vodka!

A fruity, crisp aroma that hints of apples. The initial palette is mild and slightly sweet. Light, non-syrupy coating that gives way to the natural, non-tart apple flavor.