Size750mL Proof75 (37.5%% ABV)
Smoke Lab Aniseed Vodka is a premium flavored vodka produced by one of India’s largest distillers, NV Group. This playful exploration of anise or “saunf”, a much-loved Indian herb, is 5-times distilled from high-quality basmati rice, and brought to proof with pure Himalayan water.
Notify me when this product is back in stock. 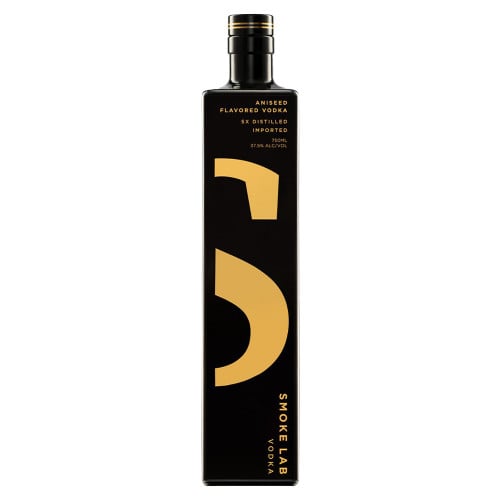 NV Group is one of India’s largest distillers of grain alcohol, with 25 years of experience in manufacturing and bottling premium quality spirits. What started in 1994 as a humble distribution facility in New Delhi, is now an industry leader and pioneer with facilities in Punjab, Haryana, Maharashtra, Goa, Chhattisgarh, Chandigarh and Uttarakhand. NV Group’s 10 state-of-the art distilleries have the production capacity of 100,000 bottles per day. They produce and bottle several popular global brands in partnership with industry giants such as Pernod Ricard and Bacardi, and an ever-growing portfolio of NV Group’s own spirits. In the renaissance of India’s alcohol industry driven by millennials, who want world-class quality while increasingly turning to local brands, NV Group has developed a range of premium spirits, which are true to the company’s Indian roots. The company makes its own brands of vodka, gin, whisky, rum and brandy. NV Group is also one of the leading distributors of liquor and wines in Delhi.

Smoke Lab is a premium vodka that was over a decade in the making. Realizing there was no locally produced premium vodka in the booming Indian spirits market, NV Group’s CEO Varun Jain went on a quest for the perfect formula. He travelled across Europe, collaborating closely with master blenders and his manufacturing team, until he found that special recipe. After that, it took another year to refine the product testing it on his friends and family. The result is a bold and smooth vodka that can compete with any European premium brand, but is also distinctly Indian. Smoke Lab Vodka comes in two flavors, classic and aniseed.

Smoke Lab Aniseed Vodka is a playful exploration of anise or “saunf”, a much-loved Indian herb. Smoke Lab vodka is 5-times distilled from locally-sourced high-quality basmati rice, and brought to proof with pure Himalayan water. It comes in a sleek minimalist bottle that reflects the progressive philosophy of this modern Indian brand.

The nose with delicate aromas of aniseed and licorice is followed by a creamy and sweet palate. Subtle fennel blossom appears on the finish.