Caskers Rewards members earn up to 4 store points back when buying this bottle.
Size4260mL Proof10 (5% ABV)
Endorsed by American country star Blake Shelton, Smithworks Hard Seltzer Lemonade Variety 12-Pack introduces you to all four expressions in this ready-to-drink hard seltzer line. All Smithworks hard seltzers are only 100 calories per serving and bottled at a very pleasant 10 proof. Enjoy them chilled.
Notify me when this product is back in stock. 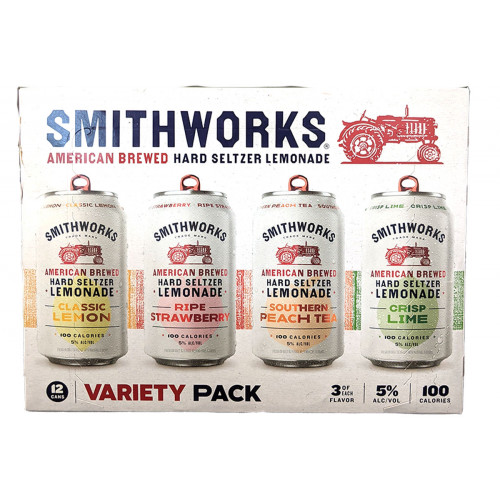 Endorsed by American country star Blake Shelton, Smithworks Hard Seltzer Lemonade Variety 12-Pack introduces you to all four expressions in Shelton's hard seltzer line. All Smithworks hard seltzers are only 100 calories per serving and bottled at a very pleasant 10 proof. You should enjoy them chilled.

Coming from Fort Smith, USA, Smithworks is best-known for their American Vodka that’s crafted with water from Lake Fort Smith. The corn for their award-winning vodka comes from Kansas, Missouri, and Oklahoma. In 2021, Smithworks partnered with American country star Blake Shelton to launch a line of premium hard seltzers, including Classic Lemon, Ripe Strawberry, Southern Peach Tea and Crisp Lime. Shelton made his debut in 2001, garnering numerous accolades since, including 9 Grammy Award nominations. He is also known as the coach on NBC’s The Voice.

All Smithworks Hard Seltzers are based on the brand's refreshing lemonade base. Classic Lemon brings fresh and subtly sweet flavors, Ripe Strawberry delivers a burst of juicy strawberry, Southern Peach Tea brings a delicious peach twist, while Crisp Lime upgrades the base with more sweet and sour lime.