Caskers Rewards members earn up to 1 store points back when buying this bottle.
Size750mL Proof80 (40% ABV)
This Moscow Mule-ready Smirnoff is made using award-winning Smirnoff No. 21 Vodka, and infused with ginger and lime.
Notify me when this product is back in stock. 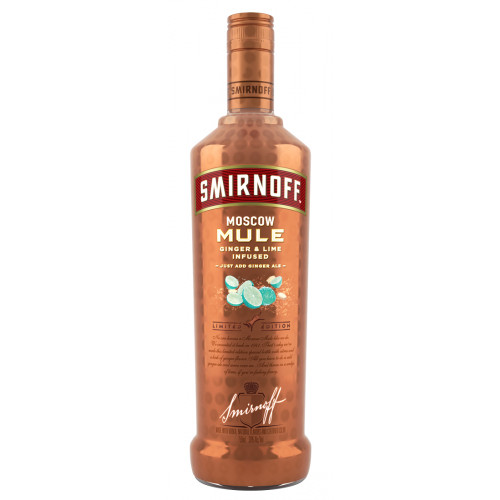 The vodka is produced using a traditional charcoal filtration method developed by P.A. Smirnoff. Now owned by Diego and sold in over 100 countries, Smirnoff is one of the most renowned vodkas in the world. Their award-winning Smirnoff No. 21 Vodka received a Double Gold Medal at the 2017 San Francisco World Spirits Competition

It’s said that Smirnoff is responsible for creating the original Moscow Mule cocktail recipe over 75 years ago. Smirnoff Moscow Mule is crafted with award-winning Smirnoff No. 21 Vodka and infused with ginger and lime. Just mix with ginger ale, garnish with a lime, and serve in a copper mug. Enjoy!

Sweet and tart notes of ginger and lime all throughout the nose and palate, followed by a sweet finish.