Learn more
Size750mL Proof83 (41.5% ABV) *Please note that the ABV of this bottle may vary
Originating from Guadalajara, Mexico, Sierra Milenario Tequila Fumado is a 100% agave tequila, adored for its smoky, agave, vanilla and dried fruit flavor. Represented by the Mayan zodiac sign of the edgy crocodile.
Notify me when this product is back in stock. 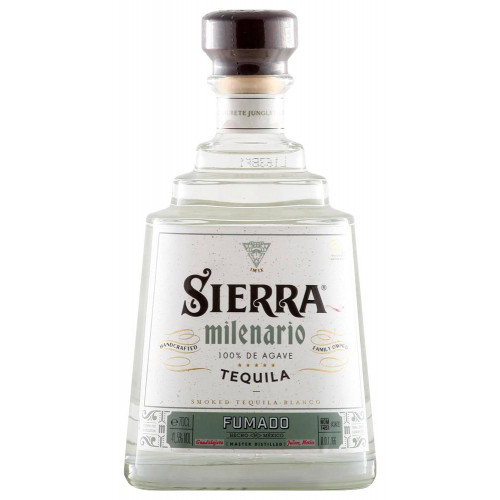 The story of Sierra Milenario begins at the time of the ancient Mexican gods when the creator god Quetzalcoatl got into a fight with the goddess of darkness for stealing the light from the sun god. In revenge, she killed Quetzalcoatl's wife, leaving him devastated. His tears falling on her grave became beautiful agave growing from Earth. After Quetzalcoatl finally killed the goddess of darkness, the sunlight returned to Earth and ripened the agave. As a thank you, Quetzalcoatl received agave nectar from the sun god to help alleviate his sorrow.

At the same spot where Quetzalcoatl's tears fell on the mineral-rich highlands of Jalisco, Destilerías Sierra Unidas distillery is situated today on the grounds of an old hacienda in Guadalajara, the capital of Jalisco. Here, the Master Distiller Rodolfo Gonzalez Gonzales is producing the 100% Agave Sierra Milenario Tequila with traditional methods, free from artificial substances and using only the best first-pressed agave juice. Following fermentation featuring a family-recipe yeast and traditional, low-grade distillation in copper vats, Sierra Milenario tequila is bottled by hand. All the tequilas in this range are represented by a different Mayan zodiac sign, capturing their distinct characteristics.

Sierra Milenario Tequila Fumado is represented by the edgy crocodile. Bottled at 83 proof, exceeding the minimum legal requirement for tequila, this is a special bottle. Made from 100% agave and following traditional methods typical for this range, the production process for Fumado Tequila is different. After the agaves are cooked, they are put in a stainless-steel container and placed on top of a brazier that burns mesquite and Mexican logs. The pot is then perforated, and the flavors infuse the agaves, resulting in crisp, fruity flavors, balanced with smooth and subtle smokiness. It is precisely for this smoky, agave, vanilla and dried fruit flavor that Sierra Milenario Tequila Fumado is widely adored.

Soft notes of smoke, dried fruit and chilly stroke you on the nose. The palate is full bodied with a hint of vanilla, roasted pecan and elegant agave undertones. The finish is long and smooth.