Learn more
Size750mL Proof84 (42% ABV) *Please note that the ABV of this bottle may vary
Named after the Spanish word for “rock,” Roca Patrón Reposado is aged in used American bourbon barrels.
Notify me when this product is back in stock.

This product is available in: DC, MI, NV, TX Unfortunately, we can't ship to PO Boxes and APO addresses. 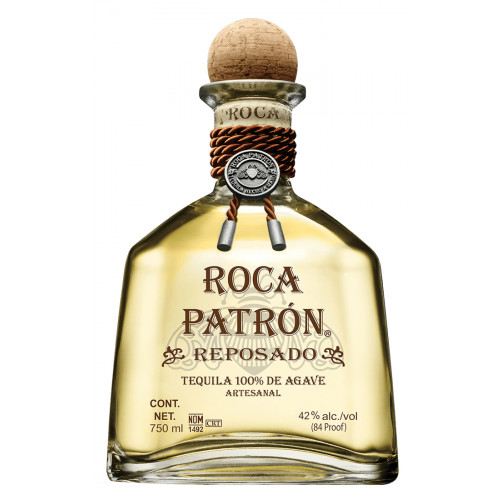 The Patrón Spirits Company was launched in 1989 by John Paul DeJoira and Martin Crowley. With its inception, came the world’s first ultra-premium Tequila. A new state-of-the-art facility was constructed in Jalisco in 2002, to facilitate its profound reception. It became the first spirits brand in its class to sell one million cases. Francisco Alcaraz is the Master Distiller & Blender behind the recipe for the Mexican spirit. Produced at the Hacienda de Patrón, the distillery sources agaves from Los Altos in Jalisco.

Named after the Spanish word for “rock,” the Roca Patrón lineup is bottled at a higher ABV than Patrón’s core range and produced using traditional artisanal methods. Roca Silver is crafted from 100% Weber Blue Agave which are harvested after six to seven years by expert Jimadors.

The agaves are then crushed by a two-ton volcanic stone Tahona, a centuries-old tradition that breaks down the fibers. The freshly milled desert succulents are slow-roasted in a brick oven for 79 hours, before being fermented in wooden vats. The agave juice is distilled in small batches through handmade copper stills with the agave fibers to produce an earthy flavor. Roca Patrón Reposado is then aged in used American bourbon barrels. Expect notes of vanilla oak and earthy flavors.

Aromas of vanilla, American oak, and citrus on the nose. The palate is smooth & sweet with flavors of ginger, caramel and mushroom. The finish is lingering and complex.