Proof88 (44% ABV)
Aged in ex-American bourbon barrels for 14 months, this Roca Añejo gets its name from the Spanish word for “rock.”
Notify me when this product is back in stock. 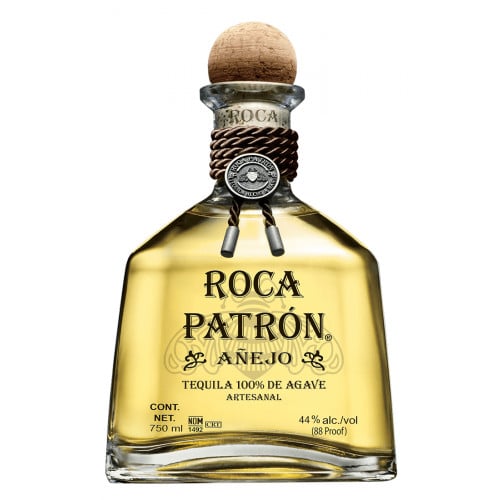 Francisco Alcaraz is the Master Distiller & Blender behind the recipe for the Mexican spirit. Produced at the Hacienda de Patrón, the distillery sources agaves from Los Altos in Jalisco. Roca Patrón is crafted from 100% Weber Blue Agave which are harvested after six to seven years by expert Jimadors. Named after the Spanish word for “rock,” the Roca Patrón lineup is bottled at a higher ABV than Patrón’s core range and produced using traditional artisanal methods.

The agaves are then crushed by a two-ton volcanic stone Tahona, a centuries-old tradition that breaks down the fibers. The freshly milled desert succulents are slow-roasted in a brick oven for 79 hours, before being fermented in wooden vats. The agave juice is distilled in small batches through handmade copper stills with the agave fibers to produce an earthy flavor. Roca Patrón Añejo is aged in used American bourbon barrels for 14 months. Expect notes of vanilla, citrus fruits, spices, and ginger.