Size750mL Proof90 (45% ABV)
This legendary French pastis is still made according to Paul Ricard’s secret recipe developed in 1932 and earned a score of 93 points (exceptional) at the 2014 International Review of Spirits.
Notify me when this product is back in stock. 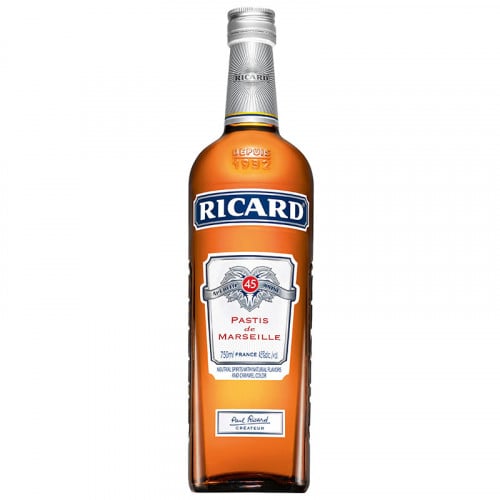 In the early 1930s in the French port city of Marseille, locals ordered anise-based liqueurs from cafes around town — while these cafes sold any number of varieties, most of the liqueurs were actually illicit. Perhaps more importantly, many of these same liqueurs were also too sweet for consumers’ tastes, and so Paul Ricard, son of a wine merchant, diligently began working on a recipe that would more adequately suit the French people’s tastes.

Ricard set up an improvised laboratory in the small commune of Sainte-Marthe to experiment with new recipes, macerating Provençal plants, fennel seeds, aniseed essence and other herbs in search of the perfect recipe. In 1932, at the age of only 23, Ricard successfully found that recipe, and along with it created the first French long drink — one part pastis with five parts water, finished off with ice. So confident was the young man in his product that he named the pastis “Ricard,” using his education in fine arts to design the product’s first label himself.

Ricard pastis is still made using Paul Ricard’s original recipe, which has remained a secret since 1932. The main ingredient in Ricard is star anise harvested in southern China — here, only the best fruits are hand-picked, sundried and distilled onsite to produce anise essential oil. Meanwhile, across the world, liquorice root is sourced from the Middle East (this ingredient is what gives Ricard pastis its legendary yellow hue) to be used in Ricard, along with the final secret ingredients which are said to come from Provençal plants.

In Bessa, a small village near Béziers, all of these ingredients are purified, macerated and blended before being filtered three times before bottling. As a result, Ricard pastis offers a refreshing aroma of star anise and licorice, which leads to a medium-bodied palate filled with flavors of fresh fruits, wood and Eastern spices. The finish is long, light and pleasant.

Ricard pastis remains one of France’s most popular beverages today, and in 2014 earned a score of 93 points (exceptional) at the International Review of Spirits. Pick up a bottle of your own!

Refreshing aroma of star anise and licorice, which leads to a medium-bodied palate filled with flavors of fresh fruits, wood and Eastern spices. The finish is long, light and pleasant.