Size750mL Proof80 (40% ABV)
This premium small-batch vodka comes from Iceland, where it is crafted with super-pure glacial water and filtered through lava rock. Single-distilled through a Carter-Head still, the entire operation is emission-free, relying on renewable geothermal energy. 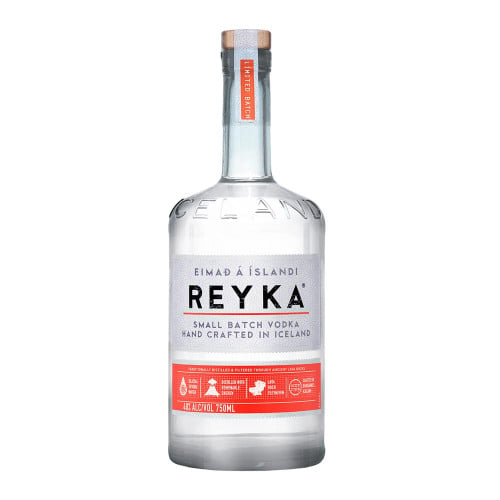 Reyka Vodka is owned by William Grant & Sons, the behemoth that is among the largest producers of Scotch in the world and is home to several massively successful labels. Yet it is still family-owned, run by Grant's descendants, and independent. Glenfiddich, Balvenie, Girvan Grain, Tullamore, and several other distilleries operate under them. Their portfolio includes gin, brandy, tequila, liqueur, rum, and vodka. The first distillery in Iceland is named after the ancient Icelandic term for "steam".

The small-batch Reyka Vodka is produced in the coastal village of Borganes in Iceland, a unique and magical place of glaciers, underground volcanoes, towering waterfalls, northern lights, and narwhals ― a fitting home to a unique vodka. It starts with glacial spring water that is filtered through an ancient lava field, making it some of the purest water in the world. The vodka is distilled from barley and wheat under the watchful eye of master distiller Þórður Sigurðsson using a Carter-Head still (one of only 6 in the world!) that ensures the perfect smoothness with a single distillation. The vodka is then filtered through lava rocks, resulting in a pure, crisp, and clean profile.

Distilled in small batches, each distillation yields 255 cases in 6 hours, within their distillery that is powered with geothermal energy from underground volcanoes. This means that the entire operation is emission-free, making for a truly environmentally-friendly spirit.

Grab your bottle of this unique small-batch vodka from Iceland today!

The nose is floral with a touch of freshly cut grass and vanilla. The gently sweet palate has notes of rose, lemon zest, lavender, and a touch of peppery spice. The finish is citrusy, grainy, and slightly warming.