Learn more
Size750mL Proof80 (40% ABV) *Please note that the ABV of this bottle may vary
The world's first platinum extra añejo tequila, Qui Platinum Extra Añejo Tequila is aged for over three and a half years in American whiskey and French Bordeaux barrels.
Notify me when this product is back in stock. 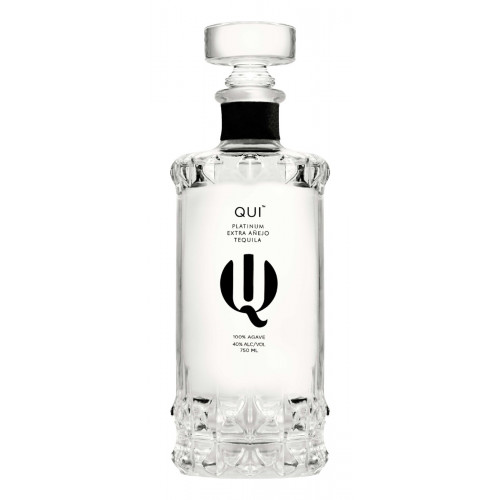 Situated on the slopes of Atotonilco El Alto — the tallest peak in the highlands region of Jalisco, Mexico — rows of incredibly flavorful agave plants are maturing under the intense Mexican sun. When the agave have reached their peak maturity, expert jimadors harvest by hand the plants containing the highest concentrations of sugar. Then, the jimadors remove the piñas — the hearts of the agave — from each plant's spiky leaves and roots using a special knife called a coa de jima. These ripe and flavorful piñas soon make their way to Qui Tequila's distillery, situated in the highlands of Jalisco. There, under the direction of master distiller Miguel Cedeno, they are split and roasted for four days in artisanal clay ovens. The slow roasting process softens the fibers of the piñas and caramelizes their natural sugars.

The roasted piñas are then crushed and fermented, before being distilled in a stainless steel pot still. Following the first distillation, the heads and tails of the distillate are discarded, leaving only the heart, which is then distilled a second time. (Hence the name Qui was born — representing the heart of the distillate and the heart of the word tequila.) After the second distillation, the tequila matures for at least three and a half years in a mix of white oak casks that formerly aged American whiskey and French Bordeaux.

After its beauty rest, the tequila, which has aged long enough to earn the coveted "extra añejo"description, is blended together before undergoing a proprietary filtration process. Following filtration, the tequila is distilled a third time, three-plus years after its initial distillations. This unique post-aging distillation results in a tequila with all the flavor and character of an extra añejo tequila, but without the typical golden color. As a result, Qui Tequila is the world's first platinum extra añejo tequila.

Incredibly smooth with a medium body that features notes of vanilla, butterscotch and a hint of oak, Qui won the Gold Medal at the 2013 Spirits of the Americas Competition, as the best extra añejo tequila judged.

Incredibly smooth with a medium body that features notes of vanilla, butterscotch and a hint of oak.