Size750mL Proof24 (12% ABV)
The signature cuvée of the Piper-Heidsieck house is a beautiful Champagne that is crafted with 50% Pinot Noir, 30% Meunier, 20% Chardonnay, and 25% reserve wines. The award-winning blend of 100 crus is aged at least 2 years on lees and at least 6 months after disgorgement. 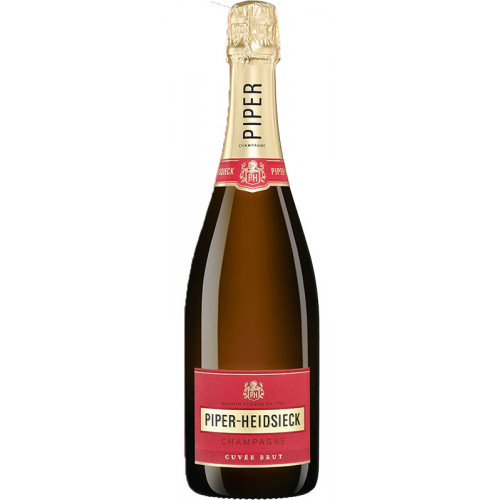 Florens-Louis Heidsieck was a German who discovered the Champagne region and its wines in 1777. In 1785, he founded Heidsieck & Cie, inspired by his future wife Agathe Perthois. Soon after, he gave his first cuvée to Marie Antoinette. The queen of France was impressed, as was Agathe Perthois, who would marry Heidsieck that same year. After his death in 1828, his nephew and cousin took over the thriving business that became known as Piper and Heidsieck. Over the years, one of the oldest Champagne houses enjoyed considerable popularity, at one point becoming the preferred Champagne of an entire generation of Hollywood actors ranging from Humphrey Bogart, Clark Gable, Ava Gardner, and Fred Astair, to Marilyn Monroe.

Today, Piper-Heidsieck produces Champagne from Chardonnay, Meunier, and Pinot Noir, working mostly with independent partners from Montagne de Reims and the Côte des Bar crus. Their signature grape variety is the Pinot Noir, known for its berry, quince, and bread notes. They produce their Champagne under the watchful eye of Cellar Master Régis Camus in a modern winery that was inaugurated in 1995.

Cuvée Brut is the house's signature cuvée that is crafted with 50% Pinot Noir, 30% Meunier, 20% Chardonnay, and 25% reserve wines. Round and vibrant, it's a blend of 100 crus that is aged at least 2 years on lees and at least 6 months after disgorgement. It features a bright, juicy, subtle, and light profile.

The pale gold Champagne has neat and lively bubbles and a bright, juicy, subtle, and light profile with nutty notes of almond and hazelnut, as well as fresh pear, apple, white peach, mint, orange blossoms, toasted bread, and citrus.