Size750mL Proof80 (40% ABV)
After the cider ferments for 12 months in century-old oak casks, this Calvados is double-distilled with traditional copper (alambic á repasse) stills. It then spends at least 15 years ― some casks considerably longer ― in ex-Calvados barrels before being blended.
Notify me when this product is back in stock. 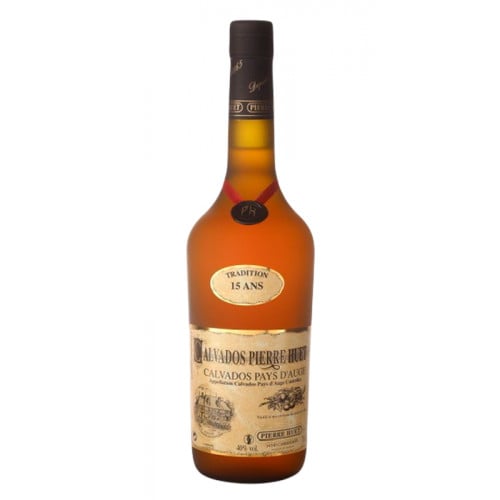 Pierre Huet is one of the oldest Calvados estates in France, having begun production in the 1800s. It is situated in the Pays d'Auge region of Normandy which has its own AOC (Appellation of Origin Control), meaning that the house's Calvados is produced in a certain region and using strict production methods. The house is led by François-Xavier Huet, who has strived to modernize the operation, introducing sustainable practices such as replacing the oil ― used to heat the stills ― with wood chips from the estate. The hot water from the distillation process heats the visitor center. Nevertheless, François-Xavier respects the 2 centuries of tradition that have made Pierre Huet the award-winning Calvados house that it is.

25 varieties of apples come from the 60 acres of the estate's orchards and include cider apples such as Bedan, Binet rouge, Bisquet, Fréquin rouge, Saint Martin, Rambault, Moulin à vent, and Mettais. The favorable soil with clay and limestone contribute to the taste and aroma of the spirit that is distilled from cider. Calvados is double-distilled using a traditional copper still (alambic á repasse), as per the strict AOC guidelines. The cider ferments for 12 months in century-old oak barrels on the estate, before it is distilled and carefully inspected. It is then returned into ex-Calvados oak barrels to mature.

Pierre Huet Tradition 15 Year Old Calvados AOC Pays d’Auge is an assemblage Calvados, meaning that it is blended by the estate's cellar master after being matured for at least 15 years ― some casks considerably longer than that. The resulting 80-proof spirit is complex and smooth with subtle floral, toffee, and honeysuckle notes. It has won a Silver Medal at the Paris Agricultural Competition in 2019.

Get your bottle of Calvados today!

It's a complex spirit with subtle floral and butter toffee aromas on the nose. It's smooth on the palate with fruit, oak, spice, and lingering honeysuckle.