Learn more
Size750mL Proof80 (40% ABV) *Please note that the ABV of this bottle may vary
This extra Añejo tequila was aged for seven years in French oak barrels, and is the oldest and first ever limited edition release from Patrón.
Notify me when this product is back in stock. 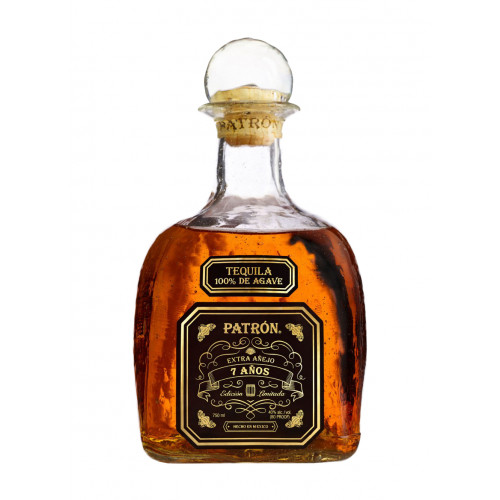 Francisco Alcaraz, Patrón Spirits Company’s international director and master distiller, has been with the company since its beginning. Alcaraz first created the recipe for Patrón when he was working at the Siete Leguas — one of Mexico’s oldest distilleries — which produced an early version of Patrón from 1989 until 2002. At Siete Leguas, Alcaraz perfected two very distinct ways of producing tequila, and when he transitioned to the new Patrón Tequila Company in the early 2000s, he brought with him his mastery of both techniques.

Patrón Tequila is a blend of tequilas produced by two methods: the traditional method, which uses a tahona — a giant grinding stones that crushes baked agave (Patrón roasts its agave in brick ovens for exactly 79 hours) before fermentation and distillation — and a newer, mechanical method which shreds the agave in a roller mill. After it has been crushed, the agave is fermented for at least three days before being distilled through hand-made copper stills at Hacienda Patrón.

Patrón Limited Edition Extra Añejo 7 años Tequila was aged in French oak for seven years — far beyond the minimum three years which is required to call tequila “extra añejo” — in a hidden corner of one of Hacienda Patrón’s barrel-aging rooms. According to Production Manager Antonio Rodriguez, “We had checked [the barrels] after 8 months to see if they were ready for reposado. It wasn’t the type we wanted. We passed on it again when we tried it for añejo. By the time we checked the tequila again, it was seven years old — and very different.” So special, in fact, that Master Distiller Francisco Alcaraz decided to bottle it as Patrón’s oldest first-ever limited-edition release.

As a result of the extra-long aging process, Patrón Limited Edition Extra Añejo 7 Años Tequila has an intense amber and golden color, along with an aroma of dried fruits, melted butter, oak tannins and vanilla. The palate is filled with more dried fruits, as well as a robust citrus character and light caramel sweetness. The finish is long and complex, with woody notes that continue to evolve on the tongue.

“It’s a happy accident of aging, temperature, wood and where the barrels were placed,” says Rodriguez. “We didn’t set out to make it, and we can’t make any more.” Only 700 cases of this spectacular tequila will ever be produced.

Pick up a bottle of this limited edition tequila today, before it's gone forever!

Intense amber and golden color, along with an aroma of dried fruits, melted butter, oak tannins and vanilla. The palate is filled with more dried fruits, as well as a robust citrus character and light caramel sweetness. Finish is long and complex, with woody notes that continue to evolve on the tongue.