Learn more
Size375mL Proof0 (0% ABV) *Please note that the ABV of this bottle may vary
This award-winning maple syrup is aged in Pappy Van Winkle barrels. Crafted in partnership with Bissel Maple Farm, the syrup goes perfectly with pancakes or cocktails and makes for a unique gift for bourbon lovers.
Notify me when this product is back in stock. 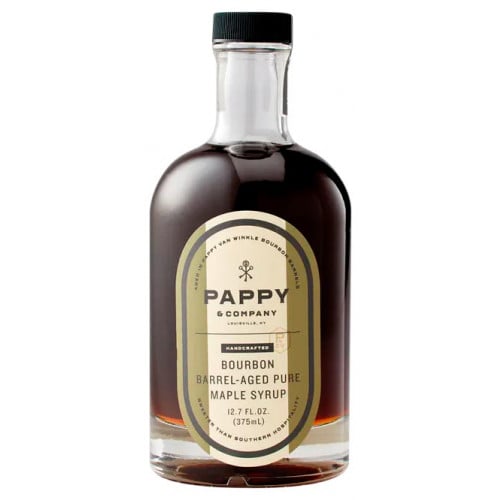 Pappy & Company was founded by Pappy's three great-granddaughters who found their own way of continuing the legend's legacy. They have a line of bourbon-inspired products that pay tribute to their great-grandfather's heritage. Their products include barware, premium cigars, unique gifts, and apparel, among others. Their award-winning maple syrup is the Pappy Van Winkle Barrel-Aged Pure Maple Syrup. Crafted in partnership with Bissel Maple Farm, the syrup is aged in Pappy Van Winkle bourbon barrels and is the perfect match for pancakes, waffles, or cocktails like the old fashioned and Manhattan.

In 1893, Julian Pappy Van Winkle Sr. began working as a traveling salesman for the W.L. Weller & Sons Company in Louisville, Kentucky. Weller & Sons was a liquor wholesaler and sold bourbon under various labels, including Old Fitzgerald and Rebel Yell. After the turn of the century, Van Winkle purchased Weller & Sons Co., together with the Stitzel Distillery, which produced most of the bourbons sold by the wholesaler, and merged the two companies. While Prohibition forced most distilleries to close their doors, Van Winkle was granted a license to continue operating his distillery and producing whiskey for medicinal purposes. By the time of his death at the age of 91 in 1966, Van Winkle was the oldest active distiller in the country.
Explore all Old Rip Van Winkle bottles >>

The bourbon barrel-aged syrup has a rich and pleasantly sweet profile with vanilla, oak, and butter notes with an extremely pleasing bourbon nose. Finishes with a distinct bourbon aftertaste as well.