$19.99
Size750mL Proof80 (40% ABV) *Please note that the ABV of this bottle may vary
A delicate and refined brandy made using the traditional French “Charentais” or double fractional distillation copper pot stills and aged in oak barrels for at least five years. The wine-like spirit displays the recognizable character of the white grape varieties used, including Rkatsiteli, an ancient pale-skinned grape variety from the Republic of Georgia.
Notify me when this product is back in stock. 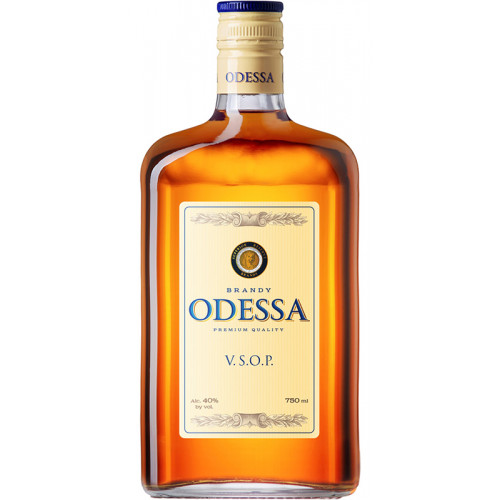 The Shustov Distillery, the producer of Odessa, is situated about 20 kilometers from the Ukrainian seaport of the same name. Known also as the “pearl of the Black Sea”, the city has a rich history of winemaking and brandy production. There, near the village of Velikodolinskoe, surrounded by picturesque vineyards, lies the oldest brandy distillery in Ukraine and one of Europe's largest distilleries to use the traditional Alembic Charentais copper pot stills. With the country’s largest collection of oak barrels of over 60,000 barrels made from French, Hungarian, and western Ukrainian oak, its production capacity is one of the biggest in the country and wider region.

Odessa is made of spirits distilled from white grapes including the Rkatsiteli, Aligoté, and Pinot varieties. For those not familiar, Rkatsiteli is an ancient pale-skinned grape variety from the Republic of Georgia, while Aligoté is a white grape used to make dry white wines in Burgundy, France, but it is also cultivated in many Eastern European countries.

Distilled using the traditional French “Charentais” or double fractional distillation copper pot stills, the heart of the distillate is carefully selected and aged in oak barrels for at least five years to enhance the delicate and refined character typical of the featured white grape varieties.

Golden-amber in color, the nose opens with rich oriental spices and citrus, followed by raisins, and notes of mature Wine. The palate is rich in honey and nuts, with a long and smooth creamy caramel finish.