Size750mL Proof80 (40% ABV)
The premium Extra Añejo expression from Ocho marks not only the year of production on each bottle, but also specifies the exact field in which the agaves were grown. Comes in an attractive wooden box.
Notify me when this product is back in stock. 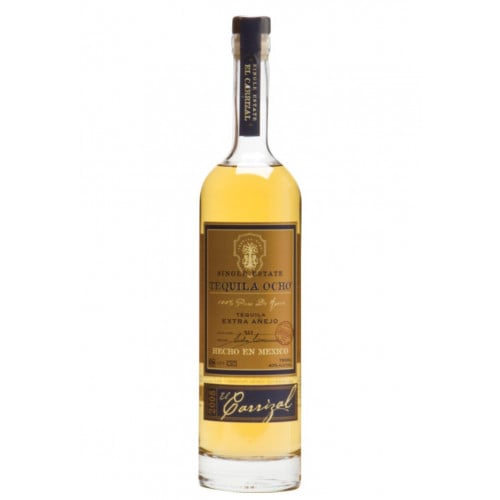 The beginnings of Ocho Tequila can be traced to 1937, when the Camarenas first started making tequila. It is a collaboration between Carlos Camarena and his family and Tomas Estes, owner of multiple Mexican restaurants and bars. He has been passionately promoting and selling tequila since 1976, making him a perfect partner for the Camarenas. The Master Distiller Carlos Camarena is a third generation of tequileros, operating in Jalisco, Mexico. He is well-respected for making high-quality spirits, which have accumulated a respectable amount of awards through the years. Ocho Tequila is the culmination of the visions of these two gentlemen. Made according to tradition from 100% agaves, grown in their own fields, they always strive for perfection, never rushing the process. They are the first to mark not only the year of production on each bottle, but also specify the exact field in which the agaves were grown.

"Ocho" translates to "eight" and the number is deeply ingrained in the distillery's history and operations. Out of the first samples produced by the Camarenas, the 8th was chosen. It's the number of years agaves need to fully ripen, as well as the number of kilograms of agave needed to produce a liter of Ocho tequila. It's also the exact number of days that takes for a freshly delivered batch of fruit to be turned into unaged tequila. Carlos Camarena has 8 siblings and the family has been distilling for 8 decades. Finally, the Reposado tequila is aged for 8 weeks and 8 days.

Each bottle of Ocho Tequila is marked with the year of production, as well as the estate or "rancho", from which the agaves come, not unlike fine wines. This makes the bottles highly collectible. Ocho Extra Añejo has been aged in ex-American Whiskey barrels for three years and is made from 100% blue agave. It's bottled at 80 proof and comes in an attractive wooden box.

Expect rich aromas including spicy cloves, cinnamon, pepper, toffee, and tobacco. The palate has plenty of sweetness in the form of vanilla and honey, as well as minty overtones. Finishes with lingering notes of agave and oak.