This product is available in: FL, NH, NJ, WA Unfortunately, we can't ship to PO Boxes and APO addresses.

Size1750mL Proof80 (40% ABV)
Distilled using copper pot and column stills, this rested expression comes from the Jalisco Highlands. Crafted with 100% blue Weber agaves and rested in American oak for 2 to 4 months, it has won several awards.

This product is available in: FL, NH, NJ, WA Unfortunately, we can't ship to PO Boxes and APO addresses. 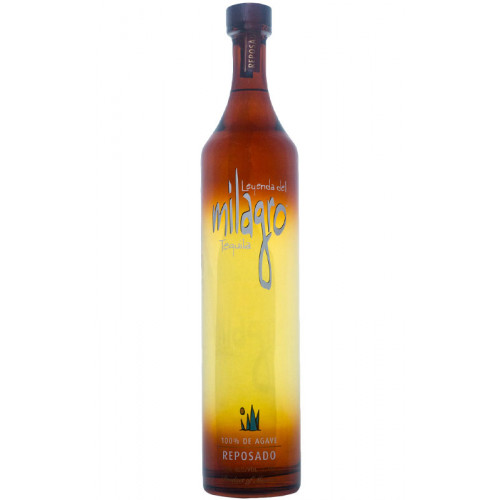 Milagro Tequila was founded in 1998 by Danny Schneeweiss and Moy Guindi. The college friends were admiring Mexico City's creative scene, bustling with passionate creativity. They felt that the same kind of creativity was missing from the world of tequila, prompting them to kickstart a brand that would bridge the world of traditional tequila with the creativity that permeates Mexico City. They teamed up with prominent Mexican Master Distiller Pedro Juarez, a tequilero with 35 years of experience.

Juarez turned out to be the perfect match, as his work with a large multi-national distiller had him feeling that his craft and creativity were being stifled. Milagro tequila is still firmly rooted in tradition, meaning that the spirit is produced in Jalisco, Mexico, using 100% blue Weber agave from the Jalisco Highlands. The agave piñas are roasted in hand-built brick ovens for 36 hours before the agave juice is fermented in stainless steel tanks, converting the sugars into alcohol. Juarez opts for two different types of stills: pot stills as well as column stills, ensuring that the vibrant flavors are intact and the resulting spirit is extra-smooth.

The rested Milagro Reposado Tequila expression then spends between 2 and 4 months in American oak casks, resulting in a robust, yet balanced flavor. The tequila has won a Silver Medal at the San Francisco World Spirits Competition in 2019, among other awards.

It's a clean Reposado tequila with prominent agave on the nose, along with some complex notes of caramel and vanilla. The palate has more agave and caramel, as well as a touch of toasted bread, culminating in a finish with gentle spice.