Be the first to review this product
Martell’s VSOP uses grapes from four of the cognac regions; Grande and Petite Champagne, Fins Bois and the Borderies. This blend differs from the others in the Martell line, which use grapes predominantly from the Borderies.
Add to Wish List
Notify me when this product is back in stock.

Martell V.S.O.P. (‘Very Superior Old Pale’) Médallion commemorates the year House Martell was founded, 1715. The bottle has a gold medallion emblem with the engraving of a portrait of Louis XIV. Martell's V.S.O.P. cognac blends eaux-de-vie of at least 4 years of age, using grapes from four cognac crus; Grande and Petite Champagne, Fins Bois and the Borderies. This blend differs from the others in the Martell line, which use grapes predominantly from the Borderies.

On the Nose there are aromas of a bittersweet lime and liquorice, quince, raisin and plum. Followed by fresh Spring notes of fine grain and hazelnut. In the mouth it is complex with soft crystallized-fruit notes. The finish is long and round.

In 1721, it is reported that they exported over 200,000 liters of signature blend to Great Britain alone. After Jean Martell’s death in 1753, the operation was taken over by his widow, his two sons, Jean and Frédéric, and his brother-in-law Louis Gabriel (brother of Jeanne-Rachel Lallemand), who further developed the house, transcendently expanding its influence. By the 19th century, Martell had established itself as the most prominent international exporter of cognac in the world, reaching as far as China and Japan.

House Martell has full range of cognacs; a collection of 10 expressions. The Martell distillery uses grapes from the major cognac crus. The majority of their offerings use Ugni Blanc (or Trebbiano) grapes from the Borderies vineyards, and their cognac is aged in distinctive Tronçais oak casks. They use a double distillation method, with traditional "Charentais alembics" (pot stills).

On the nose there are aromas of a bittersweet lime and liquorice, quince, raisin and plum. Followed by fresh Spring notes of fine grain and hazelnut. In the mouth it is complex with soft crystallized-fruit notes. The finish is long and round. 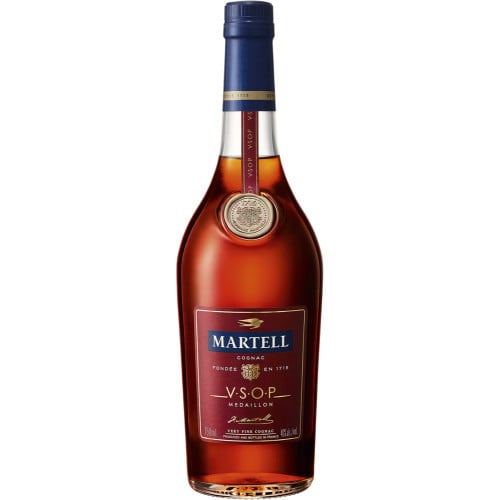