Be the first to review this product
Launched in 2013 exclusively in California in Honor of Jean Martell, Caractère distinguishes itself among the Martell core lineup in that it uses grapes from the vines of the Domaine de Jean Martell vineyards. This offering is wholeheartedly Martell. It is rich, bold, with fresh notes of citrus.
$37.99
Add to Wish List

Launched in 2013 exclusively in California, Martell Caractère Cognac is a pure house classic, wholeheartedly Martell from start to finish. It is distinguished from the rest of the core Martell range, with grapes sourced from the vineyards of the Domaine Jean Martell, this expression differs greatly from the rest of the Martell cognacs that use grapes from the major cognac regions (primarily the Borderies vineyards) “the eaux-de-vie are distilled twice without leas and aged in fine grain French barrels”, Benoit Fil, the Martell Cellar Master combines two types of eaux-de-vie to create the cognac.

In 1721, it is reported that they exported over 200,000 liters of signature blend to Great Britain alone. After Jean Martell’s death in 1753, the operation was taken over by his widow, his two sons, Jean and Frédéric, and his brother-in-law Louis Gabriel (brother of Jeanne-Rachel Lallemand), who further developed the house, transcendently expanding its influence. By the 19th century, Martell had established itself as the most prominent international exporter of cognac in the world, reaching as far as China and Japan.

House Martell has full range of cognacs; a collection of 10 expressions from their VS, to their Premier Voyage. The Martell distillery traditionally uses Ugni Blanc (or Trebbiano) grapes from the Borderies vineyards, and ages its cognac in distinctive Tronçais oak casks. They use a double distillation method, with Charentais alembics (pot stills).

Grab a bottle of this signature cognac today!

On the nose it is fresh and lively with notes of pear and citrus – lemon, grapefruit and tangerine peel. It is rounded by rich notes of sweet spices (cinnamon, clove) and vanilla. The nose also becomes richer when swirled. It also has more prominent notes of prunes and raisins. In the mouth it is sharp, with lemon and tangerine-peel notes that define the mid-palate. The finish is quite long, with notes of pastries and plum jam. 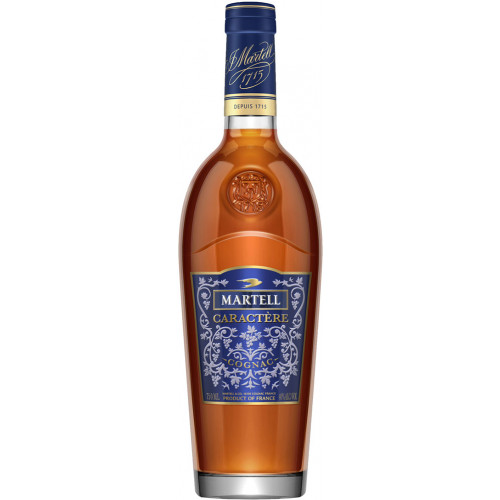