Size750mL ProofBlanche - 80 (40% ABV); Reserve, XO - 84 (42% ABV)
Crafted by a third generation master distiller, these calvadoses are pot-distilled and aged in Normandy.
Notify me when this product is back in stock. 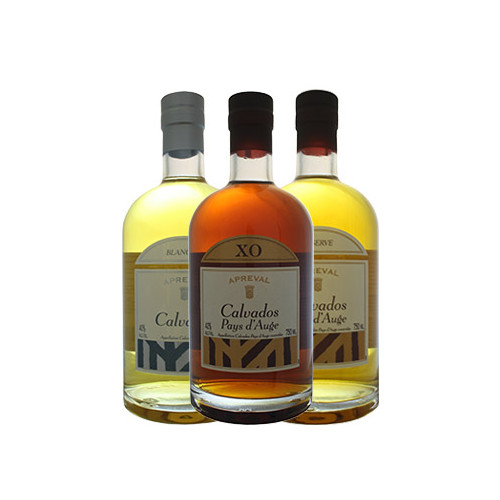 
Manoir d'Apreval Calvados Réserve is made from calvados aged at least five years, which is reflected in its bright golden color and amber undertones. The Réserve possesses aromas of ripe apples and vanilla, along with hints of tart apples, caramel and citrus on the palate. A bit more mellow than its younger predecessor, Manoir d'Apreval Calvados Réserve still demonstrates the refreshing and fruity qualities of its youth.


Pick up all three bottles of calvados today!

Blanche: Fruity aroma of fresh apples, with hints of citrus and licorice also on the nose. The taste is crisp, with sweet apple notes on the palate progressing into a refreshing and slightly bitter finish, with subdued notes of wood mingled in.