Size1420mL Proof14 (7% ABV)
Malibu Strawberry Daiquiri is a delicious ready-to-sip drink from Malibu's new line of canned cocktails. It is made with natural flavors and Malibu’s classic Caribbean rum, and comes in sleek 12-oz cans
Notify me when this product is back in stock. 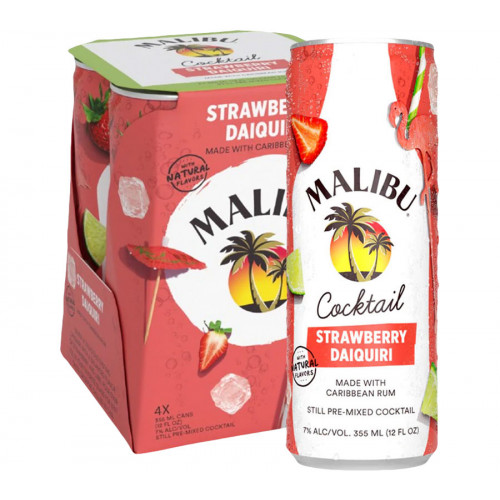 Malibu Strawberry Daiquiri is a delicious ready-to-sip drink from Malibu's new line of canned cocktails. It is made with natural flavors and Malibu’s classic Caribbean rum, and comes in sleek 12-oz cans.

Get your 4-pack of summer today!

The nose is sweet, with aromas of fresh strawberries and a hint of lime. On the palate, fresh, juicy strawberries are balanced with subtle lime and Malibu’s distinctive Caribbean rum. Sweet strawberries linger on the finish, accompanied by clean lime notes.