Learn more
Size750mL Proof132 (66% ABV) *Please note that the ABV of this bottle may vary
Made from four simple ingredients, this rum is the ideal float on top of everything tiki.
Notify me when this product is back in stock. 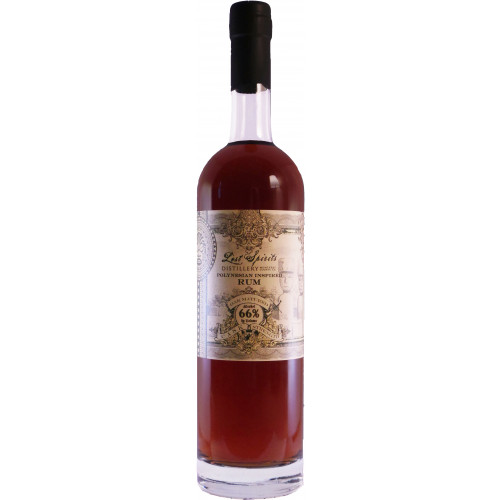 “There are two approaches to distillation,” says Bryan Davis, the founder and master distiller at Lost Spirits Distillery. “The more common approach, called high rectification, is to ferment with a lot of bad stuff in the mix and then use the still to clean the booze up. Some people also choose to ferment very neutral booze and rely on the barrel to do all the work. This is the bubble plate pot/column strategy. The other strategy is to manage the fermentation carefully so that you can distill without plates and capture as much of the fermentation character as possible. This is a low rectification pot still strategy, and it is the one I favor because I have tight control over my fermentation and raw material selection.”

Lost Spirits Polynesian Inspired Rum is crafted from just four simple ingredients: baking grade molasses, bacteria and yeast cultures cultivated on bananas and water. “By choosing or making raw materials that have the right aromatic acids in them from the start, we boost our overall ester count,” says Davis. A high ester count contributes notes of fruits, flower petals and spices to the rum. “We were inspired by the word ‘tiki’ and were looking to create a rum that personified what it meant,” says Davis, “which is why we wanted a high ester count.”

Once the ingredients are sourced, the molasses is fermented and then distilled using a low rectification pot still strategy. Then, the rum is matured in sherry seasoned oak casks. During maturation, “phenols from the charred oak are severely limited to prevent the fruity carboxylic esters from becoming fully mature phenolated esters.” In short, this means that the maturation process is stopped at the point where the rum is the fruitiest. “The entire process is mapped using mass spectroscopy, and controlled using a host of patent pending technologies.”

Lost Spirits Polynesian Inspired Rum has an aroma of rich caramel, butter pastries, cherries and pineapple that gives way to notes of wet pineapple juice, citrus and a hint of red berries. Designed for mixing, this rum is the ideal float on top of everything tiki.

Aroma of rich caramel, butter pastries, cherries and pineapple that gives way to notes of wet pineapple juice, citrus and a hint of red berries.