Caskers Rewards members earn up to 1 store points back when buying this bottle.
Size750mL Proof80 (40% ABV)
Gluten-free and made from 100% potato, this vodka earned the Gold Medal at the 2011 New York International Spirits Competition and the 2012 San Francisco World Spirits Competition.
Notify me when this product is back in stock. 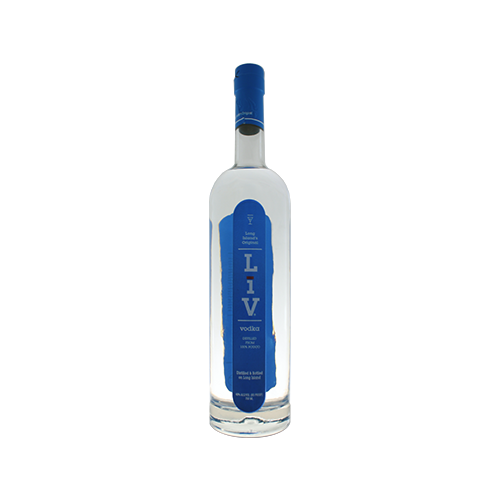 In the early 20th century, Henry and John Palumbus emigrated to the United States from Poland and purchased a farm on the 30-mile-long North Fork peninsula of Long Island. After building a barn on the farm, the brothers began growing and harvesting potatoes — Long Island has long been known to produce one of the finest potatoes in the world. Today, nearly a century after the Palumbus' emigrated to the United States, their 80-acre farm and barn are home to Long Island Spirits, Long Island's first craft distillery.

LiV (rhymes with five) Vodka is crafted using only locally-farmed and sustainably-harvested marcy russet potatoes from Long Island (including potatoes sourced from the Palumbus farm). Surrounded by the Peconic Bay, Long Island Sound and Atlantic Ocean, Long Island experiences moderate temperatures, mild winters and consistent rainfall — an ideal environment for cultivating potatoes. "For me, the Long Island potato is such a unique commodity," says Rich Stabile, Long Island Spirits' founder. The potato's small diameter and high skin-to-flesh ratio add flavor and sweetness to LiV Vodka. "It's one of the best potatoes available in the world, actually, and it's got a perfect starch content to make vodka, so I wanted to take advantage of that."

After sourcing the potatoes, Stabile mashes and ferments them, before distilling the wash through his twin, 650-liter custom-made copper pot stills equipped with 30-foot tall rectification distillation columns. Each batch is distilled three times over, before Stabile removes the heads and tails from the distillate and brings the hearts to proof with water sourced from an aquifer beneath the 100,000-acre Pine Barrens Forest Preserve.

Stabile goes through roughly 8,000 pounds of potatoes per day — about 15 pounds of potatoes go into each bottle of LiV Vodka. "Less than one percent of all vodkas are made from potatoes because it's a much more expensive process,"Stabile explains. "Eighty percent of a potato is water, so you're starting out with much less of a starch-based element to begin your fermentation process."

After bringing the gluten-free vodka to proof, each bottle of LiV Vodka is filled and labeled by hand. The label — which transitions from a light to dark blue — is meant to be evocative of Long Island's unique geography.

"I love getting up in the morning and coming here," says Stabile. "I love the beautiful aromas that come out of the distillery. It smells like mashed potatoes when we're fermenting. Every day just seems to get better."

Creamy, slightly buttery texture and aroma. Bright and smooth, with notes of almond, banana and a hint of peppercorn. Bursts of citrus flavors before a clean, elegant finish.