Caskers Rewards members earn up to 2 store points back when buying this bottle.

This product is available in: AZ, MO Unfortunately, we can't ship to PO Boxes and APO addresses.

Size750mL Proof86 (43% ABV)
A tribute to a drink that hasn't been made in the United States in decades. Made with organic ingredients, in small batches, this seasonal release is a fruity floral masterpiece barreled at 86 proof and aged for 4 years.
Notify me when this product is back in stock.

This product is available in: AZ, MO Unfortunately, we can't ship to PO Boxes and APO addresses. 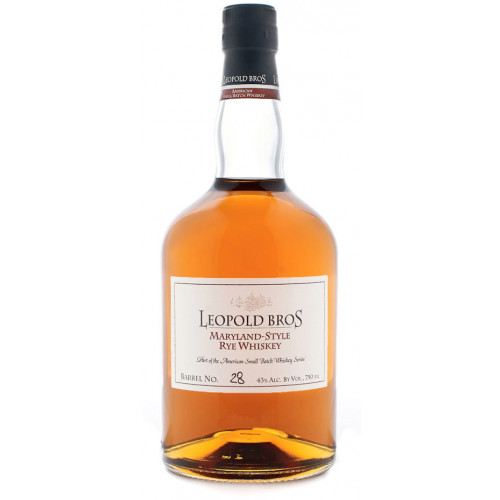 There are two very different style categories of Pre-Prohibition American rye whiskey The first, Pennsylvania rye is traditionally spicy, dry, and heavily oaked. The second type of rye is Maryland rye, unlike its counterpart, it is fruity, a floral rye, less aggressive than the Pennsylvania. Leopold Bros. Maryland-Style Rye Whiskey creates such unique flavor profile by carefully hand selecting a variety of yeast strains to use in their fermentation process.

Leopold Bros. Maryland Style Rye release is a tribute to a drink that hasn't been made in the United States in decades. Traditionally the Maryland Style rye whiskey is barreled at 86 proof, and Leopold withholds that tradition. They believe that this is enabling the flavors to develop. The whiskey is aged in charred American oak barrels. On the Nose are notes of woody rye, on the palate are flavors of vanilla, sugar, citrus green wood, pine, and cocoa and clove notes late in the palate. The finish is rounded with rye vanilla chocolate wood notes.

On the Nose are notes of woody rye, on the palate are flavors of vanilla, sugar, citrus green wood, pine, and cocoa and clove notes late in the palate. The finish is rounded with rye vanilla chocolate wood notes.