Learn more
Size750mL Proof80 (40% ABV) *Please note that the ABV of this bottle may vary
Made from Virgin New Potatoes, this vodka was rated the top vodka in the world by Wine Enthusiast.
Notify me when this product is back in stock. 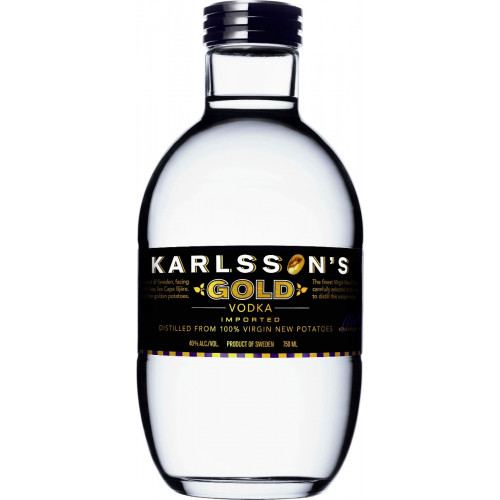 Karlsson's Vodka is the only vodka in the world made from Virgin New Potatoes. "Why should such an extremely expensive raw material be used for vodka production,"asks BÃ¶rje Karlsson — the vodka's creator — rhetorically. "The only reason is that it has a flavor, it has a taste, which is different."Once the potatoes have been harvested, they are mashed and fermented before the wash is distilled in a single pass and bottled without filtration.

"Most vodkas are distilled many, many times," says Karlsson. "They try to produce something that has no smell or taste at all. The whole idea of this project was to create something which had a taste."

Karlsson's Gold has a unique, mineral aroma with notes of black pepper, ginger and vanilla on the palate. The finish is crisp and clean, and ends with a hint of cinnamon. Karlsson's Gold Vodka earned a score of 94 points from Wine Enthusiast, which rated it the top vodka in the world. Pick up a bottle today!

Mineral aroma with notes of black pepper, ginger and vanilla on the palate. Finish is crisp and clean, and ends with a hint of cinnamon.