Learn more
Size750mL Proof80 (40% ABV) each *Please note that the ABV of this bottle may vary
Distilled from 100% certified-organic rye, one of these vodkas was named the "Best Ever"by Trump Magazine. 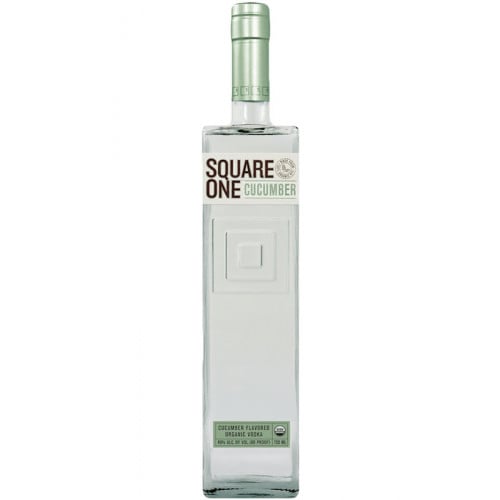 About Square One Cucumber Vodka

Inspired by the farmers' markets in Marin County, California, Allison Evanow set out to create a new vodka from scratch, or rather, square one. Evanow had previously been Head of Marketing at a Napa Valley winery, and then became a brand ambassador at Jose Cuervo, which rekindled her love of spirits and mixology. "The creativity of spirits,"she says "is at so many levels. How you make the spirit itself? How you create a cocktail using your spirit of choice? How do you serve the cocktail? How fun is that?"

Square One Organic Vodka is a vodka distilled entirely from organic rye grains harvested from North Dakota. The state's alpine climate and dry environment — North Dakota experiences an average of only 17 inches of rainfall each year and temperatures as low as ˆ’60 °F — result in grains that are exceptionally flavorful and plump.

After the rye grains are harvested, they are milled and mashed before being organically fermented (Square One's proprietary fermentation process took nearly two years to develop). By using only natural yeasts during the fermentation process (no genetically-modified yeasts, phosphates or anti-foaming agents of any kind are introduced), the vodka is able to retain its unusually soft and delicate taste. Once the grains have been fermented, they are distilled in a single pass through a four-column continuous distillation still.

Following distillation, Square One Organic Vodka is filtered and brought to proof with pure spring water sourced from the Snake River. It has notes of nutty dough, white pepper and spicy rye that are balanced by a subtle vanilla undertone, and lead to a clean, smooth finish. Square One Organic Vodka was named one of the of "Best Ever"vodkas by Trump Magazine, and earned a score of 94 points from the Beverage Testing Institute.

Square One Cucumber Vodka is made by infusing Square One Organic Vodka with organic cucumbers. The vodka has an aroma of fresh herbs and nutty rye that give way to bold notes of cucumber and salt on the palate. The finish is cool and refreshing, with touches of black pepper, cucumber and spices. As a result of its fresh, cucumber flavor infused in an incredible vodka base, Square One Cucumber Vodka was called "the best of both worlds"by Drink Spirits.

Square One Basil Vodka is made by infusing Square One Organic Vodka with the essence of four organic varieties of basil: Genovese, Thai, Lemon, and Sweet, together with a touch of coriander, honeysuckle and lemongrass. The vodka has the sweet and spicy flavors of basil, along with hints of lemongrass, pepper and leafy herbs. The finish is slightly warming and incredibly well-balanced.

Don't be a square — pick up three unique vodkas and try them each in cocktails today!

Organic: Nutty dough, white pepper and spicy rye that are balanced by a subtle vanilla undertone, and lead to a clean, smooth finish.