Size750mL Proof80 (40% ABV)
A traditional Reposado tequila, made with the original Jose Cuervo recipe from 1795. Crafted from 100% blue agave, it's aged for at least 2 months in oak barrels. Bottled at 80 proof, it boasts a smooth and subtle palate.
Notify me when this product is back in stock. 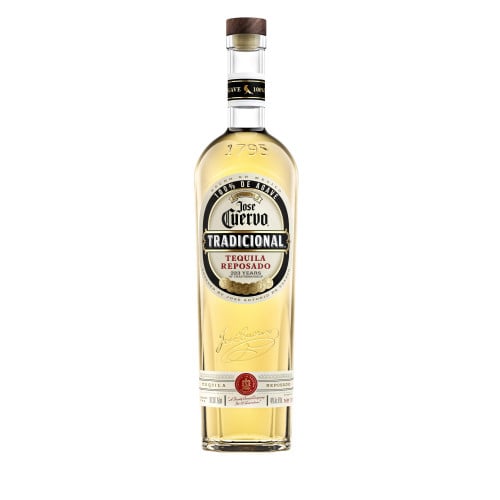 In 1795, José Antonio de Cuervo y Valdés was the first person in the world to obtain a license for tequila-making from King Carlos IV. Today, every fifth tequila bottle that’s sold in the world is made by Jose Cuervo.

Jose Cuervo’s story actually began even earlier, in 1758, when José Antonio de Cuervo y Valdés was granted a piece of land with the purpose to grow agave from King Ferdinand VI. With over 250 years of experience, the company is still family-owned today, and the precious methods, recipes and craftsmanship have been passed down for generations. Today, Jose Cuervo is helmed by the Beckmann family – descendant of Don Jose Antonio de Cuervo – with Juan-Domingo Beckmann as the 6th generation leader of the company.

The agave used in José Cuervo is matured in the fields that surround the Tequila Volcano. After the harvest, the cores of the agave, which contain the most flavorful portions, are extracted and sent to the La Rojeña distillery, the oldest operating distillery in Latin America. The agave cores are roasted, grinded and smashed with the resulting extract placed into tanks to ferment.

Jose Cuervo Tradicional Reposado is a 100% blue agave tequila, aged for at least 2 months in oak barrels. The agave comes from the family estate in the town of Tequila, Mexico. This traditional Reposado is based on the original recipe that's been passed down for generations since 1795 as it is considered the first tequila created by the Cuervo family. Still made today in the same traditional way, it's bottled at 80 proof and boasts a smooth, subtle and complex palate with notes of cooked agave, light oak, vanilla, and pepper.

Straw gold hue. The nose is light with cooked agave, vanilla, light oak, and pepper. The palate is medium bodied with notes of roasted agave, pineapple, oak, and white pepper. The finish is gentle with herbal notes, pepper and agave flavors.