Size750mL Proof80 (40% ABV)
Reserva de la Familia Platino is an ultra-premium unaged tequila made with 100% blue agave. This perfectly balanced and smooth silver tequila is crafted in small batches at Jose Cuervo’s distillery La Rojeña, which is the oldest active distillery in Latin America.
Notify me when this product is back in stock. 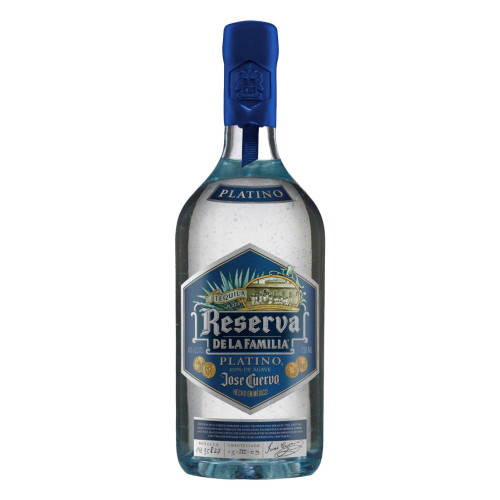 Cuervo has been producing tequila ever since 1795, when Jose María Guadalupe de Cuervo began selling Vino Mezcal de Tequila de Jose Cuervo after receiving the official charter from the King of Spain to produce and distribute tequila commercially. It however all started with Jose María’s father, José Antonio de Cuervo, who, in 1758, was given a writ of land ownership by King Fernand VI to plant agave on his lands. Hundreds of agave plants they were cultivating eventually multiplied to millions of plants, and now Jose Cuervo owns the largest holdings of agave in the world, nestled in rich, volcanic soil at the foot of the Tequila Volcano. Each day, 200 to 300 tons of agave are put in the ovens to cook at Jose Cuervo’s distillery La Rojeña. Founded in 1812, La Rojeña is the oldest active distillery in Latin America. Today, Jose Cuervo is the best-selling brand of tequila, and remains a family owned enterprise, run by José Antonio de Cuervo’s descendants.

Reserva De La Familia is Jose Cuervo’s line of ultra premium tequilas, carefully crafted in small batches using an artisanal process handed down through generations. The blue agave for these expressions grows in the estate’s richest volcanic soils, and is carefully hand-selected before it is taken to La Rojeña to cook for a total of 48 hours. Once the tequila is distilled, it is either bottled unaged as Platino, or aged in French and American oak barrels and expertly blended by Jose Cuervo’s Master Distiller Alex Coronado to make Reposado and Extra-Añejo.

The nose is peppery, with honeyed agave and a hint of apple and parsley. A unique, sweet and spicy palate has notes of melon, honey and hay. The medium finish is crisp with notes of chamomile and cinnamon.