Size750mL Proof80 (40% ABV)
Distilled from local apples pressed into cider in the Hudson Valley, this unique vodka earned a score of 94 points from the Beverage Testing Institute in 2016.
Notify me when this product is back in stock. 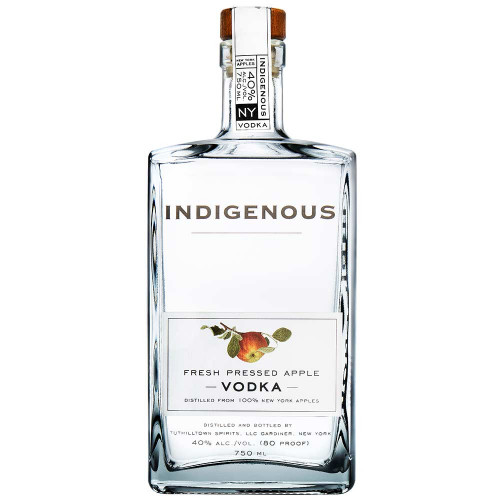 Two years prior to producing their first batch of vodka using scraps collected from a local apple slicing plant, Ralph Erenzo and Brian lee converted one of the mill granaries at Tuthilltown Gristmill into a micro-distillery in 2003. The mill that spent 220 years running on waterpower to render local grains into flour, landing itself on the National Register of Historic Places, now attracts tourists seeking to taste the products of New York’s micro-distillery pioneers.

Each bottle of Indigenous Fresh Pressed Apple Vodka contains over 80 Hudson Valley apples grown on local farms within five miles of the distillery. The apples are pressed into cider, which is fermented before being double distilled through their 20-plate copper pot stills. Make no mistake, this isn’t apple flavored vodka — which is typically comprised of neutral grain spirits with apple flavoring added — this is vodka handcrafted from apples one batch at a time with no flavors added.

As clean and crisp as the fruit it’s distilled from, Indigenous Apple Vodka has an aroma of vanilla, caramel, and (of course) apples; leading to a soft, fruity body peppered with spices and nougat, followed by a chalk finish. A delightful and charming vodka that adds nuance to cocktails, it is equally suited to being served over ice with a lemon twist. The sweet apple cider flavor anchors this vodka, a welcome departure from grain-distilled versions.

The spirit scored 94 points in 2014 from the Beverage Testing Institute.

Clean and crisp with an aroma of vanilla, caramel, and apples. Soft, fruity body peppered with spices and nougat, followed by a chalk finish.