Size750mL Proof80 (40% ABV)
Based on Herradura's aged Añejo tequila, this expression is charcoal-filtered to remove any impurities, producing a clear spirit. Before filtration, a dash pure agave nectar is added, which brings additional cooked agave notes to the finished tequila.
Notify me when this product is back in stock. 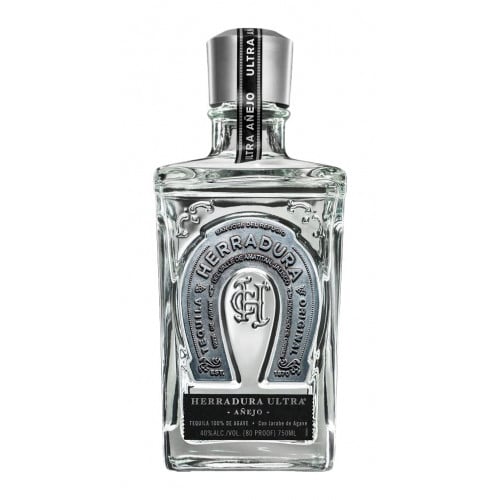 In 1870, Félix López began cultivating blue weber agave from the fields of the San José del Refugio Hacienda, situated in Jalisco, Mexico. Since then, expert jimadores have been nurturing the crop at the hacienda, which ultimately came to be known as Casa Herradura. Today, the agave growing Casa Herradura, which can take up to ten years to mature, grow up 2 meters high and weigh nearly 500 pounds, are descendants of the original agave growing on the estate in 1870.

Herradura Seleccion Suprema Extra Añejo Tequila is crafted using agaves harvested exclusively from the Casa Herradura estate. Once the agaves have been harvested, the heart of the plant (the piña) is stripped away from its leaves using a special knife called a coa and cooked for approximately 26 hours in ovens made of stone and brick. During this cooking process, the once-white piñas turn a deep orange color, and reveal an incredibly sweet and intense aroma (the piñas are so sweet that chunks of cooked agave are often sold as candy in the street markets of Jalisco).

Once the piñas have been cooked, they are crushed and then fermented for up to seven days using natural, airborne yeasts. Then, the wash is twice distilled and the Herradura Añejo tequila is matured for 25 months in American white oak casks. As a result of this long aging process, the tequila is extra-smooth with cooked agave, toasted oak, and dried fruit notes.

Herradura Ultra Añejo Tequila is based on the Añejo that is blended with the bourbon barrel-aged Selección Suprema Extra Añejo. It's special in that it's an aged expression that has been charcoal-filtered to remove any impurities, producing a clear spirit. Before filtration a dash pure agave nectar is added, which brings additional cooked agave notes to the finished tequila.

The fruity and sweet profile opens with gentle cooked agave notes, along with spice, vanilla, and citrus. More agave is on the palate, along with caramel, honey, and toasted almonds. Finishes super smooth with light spice and a lingering sweetness.