Learn more
Size750mL Proof80 (40% ABV) *Please note that the ABV of this bottle may vary
This newest of Hennessy’s VS limited editions is a striking collaboration between Hennessy and Argentinian-Spanish artist Felipe Pantone.
Notify me when this product is back in stock. 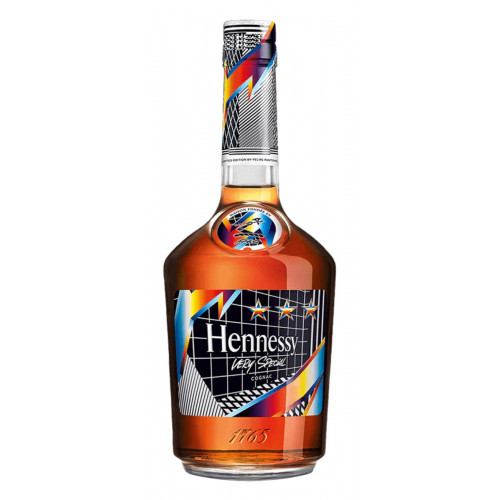 This newest of Hennessy's VS limited editions is a striking collaboration between Hennessy and Argentinian-Spanish artist Felipe Pantone. During Felipe Pantone's first visit to Cognac, France, he had a conversation with 8th generation Hennessy Master Blender, Renaud Fillioux de Gironde, about the similarities between Cognac-making and his own creative process as an artist.

"Whether it's in art or in Cognac-making, you need to appreciate the past but at the same time it's important to constantly reinvent yourself if you want to keep the flame alive," Pantone says. Pantone was granted access to the Hennessy bottle archives, to inspire his work titled W-3 Dimensional Three Stars, incorporating many of Hennessy's historical elements, as well as his own signature lightning bolt.

This Hennessy VS Limited Edition by Felipe Pantone is Hennessy's signature VS. A full-bodied cognac with intense character, it reveals its liveliness whether enjoyed neat, on ice, or with a mixer.

Maison Hennessy is one of the most iconic and distinguished cognac houses. The brand, which has become synonymous with cognac, has significantly shaped the history of this sophisticated French spirit. The dynastic Hennessy family has been dominating the Cognac industry for two and a half centuries. In 1765, Richard Hennessy, an Irish officer serving in Louis XV’s army, set out to create the world’s finest cognac. The refined and highly popularized elixir became a thriving export business, shipping as far as Ireland, Britain, and Europe.

Today, Hennessy is part of LVMH Group, prevailing as one of the most famous innovative, revolutionary cognac companies globally. The brand is known for cultivating profitable relationships across markets, like its well-known relationship with the Hip-Hop industry. The Hennessy estate/headquarters are based in Cognac’s famous town in Charente, where cognac production reigns supreme.
Explore all Hennessy bottles >>