$12.99
Size1420mL Proof0 (0% ABV) *Please note that the ABV of this bottle may vary
Combining the herbal bite of ginger and turmeric with Hella's proprietary bitters, this bold drink is just as delicious on its own as a refreshing aperitif or with a splash or two of whiskey. The carbonated drink contains only 10 calories per can and zero sugar.
Notify me when this product is back in stock. 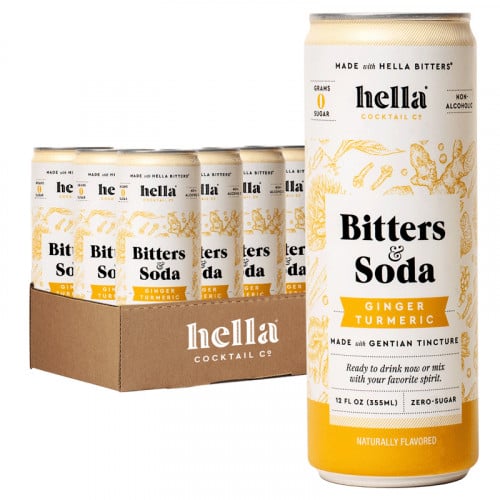 The entire Bitters & Soda lineup of canned drinks has zero sugar, no alcohol, and has plenty of health benefits, being good for digestion and anti-inflammatory. The aperitifs get their refreshing flavor from a gentian tincture from the south of France. The Ginger Turmeric combines the bite of ginger with turmeric and gentian bitters for a boldly flavored drink. It has zero sugar and only 10 calories per can. Its carbonation makes it super refreshing on its own, but it pairs incredibly well with whiskey as well.

Get your 4-pack of this aperitif-slash-mixer today!

Refreshing on its own or a delicious mixer that pairs well with whiskey, this drink has a bold herbal bite of ginger and turmeric, combined with a pleasant bitterness.